It would be trivial to do this with an Arduino, but I'm trying to think of how to do this with some basic, low cost electronics - some way that I could make dozens of these and run them off something like a coin cell. I'd like to spread them around in an environment and get a "light map" of temperatures when viewed in the dark.

The effect would be a bright blue light at the coldest temperature, that would eventually change to a bright red light at warmest.

Any thoughts on how this could be done in a low-cost/simple way?

The simplest analog circuit I can come up with is this: 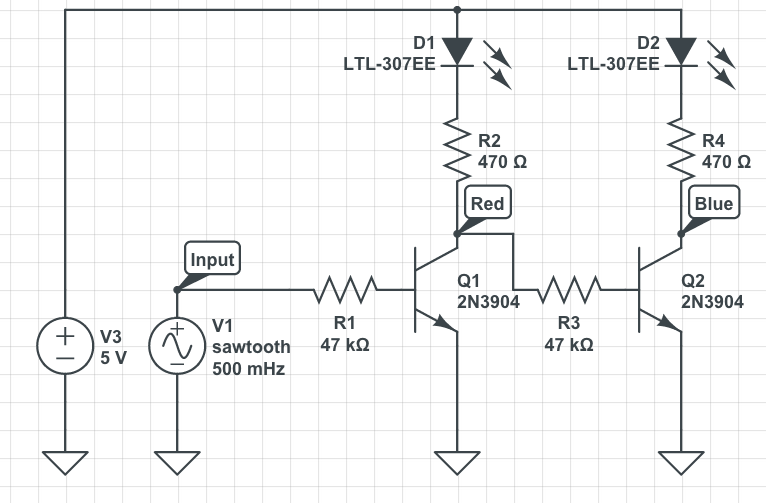 The values of R1 and R3 may need to be adjusted specially if you use other transistors (you can use variable resistors to find out the correct values then replace them with fixed value resistors).

You may also need a voltage divider on the base terminal of Q1.

This is the output signal analysis. 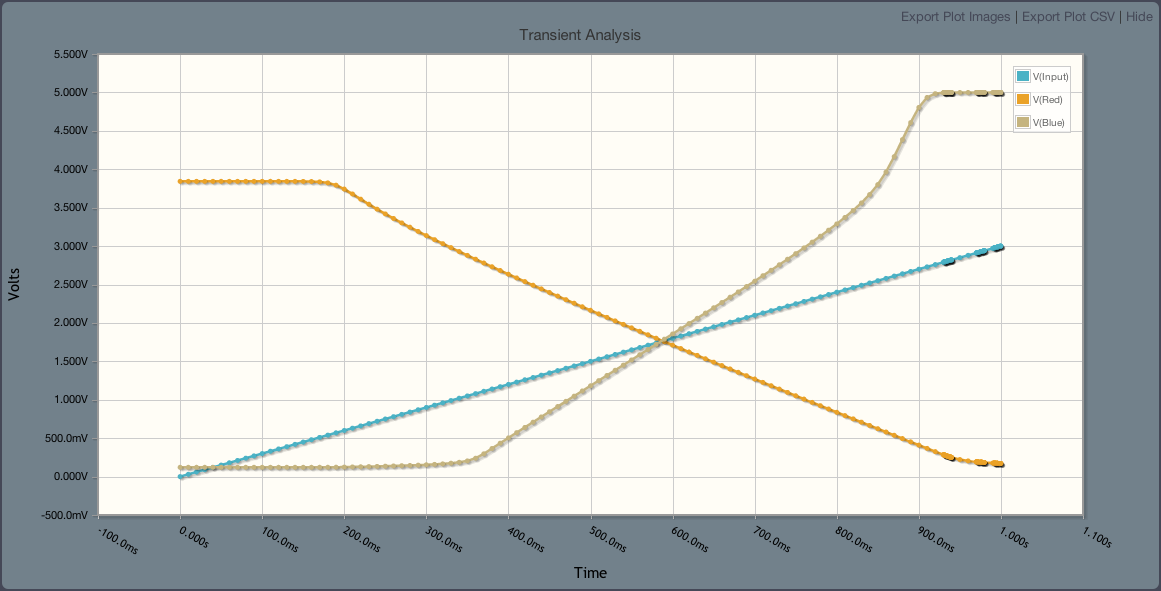 This assumes you are using a common anode RGB LED.

The problem with using discrete components is that you will find it tricky to get the colours just right. You may need specific brightness curves, which will be almost impossible with transistors. For example, to make an LED appear to double in brightness, you may actually need to quadruple the light output (either using current or duty cycle). Look up psychophysics on Wikipedia.

I would just use the lowest cost micro controller you can find. As long as it has one input pin and three output pins, that should be enough. It should easily compete with the discrete components on price, and it will give you much more flexibility to modify the colours.

I have done this very thing using a PIC10. It worked a treat. This is a very small and cheap little MCU. On Farnell, they are just £0.27 for 100. The only other components you will need are the LEDs, thermistor and a resistor. Cheaper, simpler, and much more flexible than the discrete option.

Not the answer you're looking for? Browse other questions tagged led temperature rgb or ask your own question.

1
7-color RGB LED Help
1
RGB led each color on at a specific voltage
3
Expanding Range Of Analog Values From Temperature Sensor
7
Circuit that switches one led or all three
0
Controlling RGB LED (common anode) with Arduino
4
LDR + RGB Led = Color sensor. How to calibrate it?
2
Controlling RGB led strip each color with a switch
1
RGB led weird color behaviour (blue except when touched to skin)
0
Problems with controlling a RGB-LED
0
Building an RGB LED Transilluminator?