I2C/TWI in ATMEGA - where is voltage source?

While reading about I2C/TWI protocol, i recognized as important part the ability to pull the signal down by any member of the communication. Thus pull-up resistors being very important here.

There are few schematics I found: http://www.cypress.com/documentation/application-notes/an50987-getting-started-i2c-psoc-1 https://cs.wikipedia.org/wiki/I%C2%B2C https://www.superhouse.tv/i2c-for-arduino/ All of these schematics contains VCC source for SDA and SCL.

What I do not get is where/what is voltage source in the case of ATMEGA & sensor (or two atmels cpus). In all schematics I have found there are only two cables - SDA ~ SDA and SCL ~ SCL.

I cannot grasp how would that work if there is not external VCC source. Sorry if the answer lies somewhere here on the stack, I could not find it.

As requested - links with vcc missing

In here https://howtomechatronics.com/tutorials/arduino/how-i2c-communication-works-and-how-to-use-it-with-arduino/ - there is actually both of the schematics (in the beggining one with the external voltage connected through resistor to SDA & SCL) but in the schematics with arduino and two moduls, no vcc.

I2C signals are externally pulled up. The current flows from the pull up. Signal pins are open drain and only set the low signal level.

Sometimes schematics, especially simplified diagrams, simply leave out the power and ground connections. They are assumed to be provided somehow but the detail is not important.

What I do not get is where/what is voltage source in the case of ATMEGA & sensor (or two atmels cpus). In all schematics I have found there are only two cables - SDA ~ SDA and SCL ~ SCL.

Thanks for updating the question with an example of one of the schematics that you don't understand, which I've copied below: 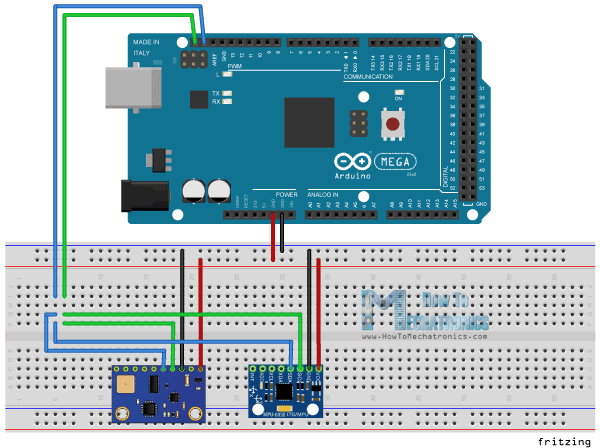 (Source - How To Mechatronics)

In all schematics I have found there are only two cables - SDA ~ SDA and SCL ~ SCL.

Actually SDA and SCL are not the only connections in that diagram.

From experience, I've marked the I2C pull-up resistors by adding yellow rings on this image from that web page: 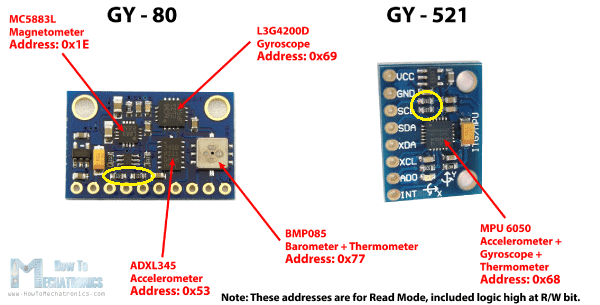 (Source - How To Mechatronics)

The explanation above shows where the I2C pull-ups resistors are, in the diagram you linked:

(There are some cases, where you would need to manually change the I2C pull-up resistors which were originally fitted on such breakout boards, especially when connecting multiple breakout boards on the same I2C bus. That decision depends on factors such as the length of the bus, the I2C clock speed, the I2C pull-up voltage and the specific resistor values originally fitted on the boards.)

Not the answer you're looking for? Browse other questions tagged i2c atmel or ask your own question.