I'm having the following problem. I got to analyze a BJT differential pair with emitter degeneration of both transistors. I calculated the theoretical expressions of my gain and obtained (since the transistors are equal):

The numerical values here don't matter for my question I guess. Then I proceeded to simulate my circuit LTSPICE. As I expected, the values were slightly different from the ones obtained theoretically. What I did not expect was that the values of the gains were slightly different from one another, while that transistor are equal (there should symmetry on the circuit). Why is this happening?

EDIT: Here is the schematic used 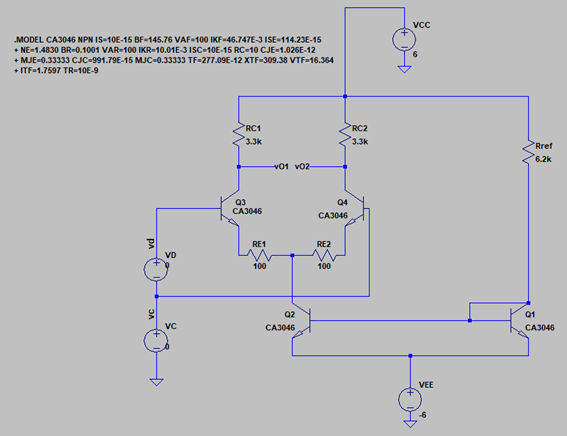 as well as the operating point:

I notice that the current flowing in each of the voltage sources is a little bit different... Could that be the reason? And why are they different?

Both gain values can be equal only if two conditions are met:

(2) Both signal input voltages (between B and E) are equal (not fulfilled).

For a good understanding of the circuits function it is essential to realize that - for each of the transistors - the voltage Vbe matters (and not only the voltage at the base node).

What is Vdx? In contrast to Q3, the transistor Q4 receives an input signal (caused by Vd) from the emitter of Q3 (acting as a emitter follower). This voltage Vdx is slighly smaller than Vd (emitter follower gain <1). The voltage at the base of Q4 is the DC voltage Vc only!

Interpretation (for a correct understanding): Both transistors (Q3 and Q4) can be seen as a series connection of a common-collector and a common-base stage.

Not the answer you're looking for? Browse other questions tagged amplifier bjt differential or ask your own question.