When you connect two batteries in series, why doesn't the middle short?

Your problem is there are two definitions for the phrase a short:

A) A short is high current flowing through a wire unintentionally.

B) A short is two places connected by a low-resistance interconnection (as a wire).

Both are correct but as much as A implies B, this does not mean B implies A. Using the same term a short for both makes you think they are equal, which they are not.

When you connect the plus from one battery to the minus of the other, you have a short of the second kind. However, there is no current flowing, as this requires a circuit —a closed loop— so obviously, B does not imply A.

EDIT: There was some confusion about the heat production as well, which I explained in the comments before.

Because \$P=I^2\cdot R\$ for each individual connection, and \$I\$ being identical in both "resistors" as they are part of the same loop, this means there is ten times more heat produced in the wire than in the bumper-to-bumper connection.

In addition, the batteries are lumps of metal and able to take a lot of heat without a significant temperature rise.

Both is why the bumper-to-bumper connection stays considerably cool during an outer short circuit. 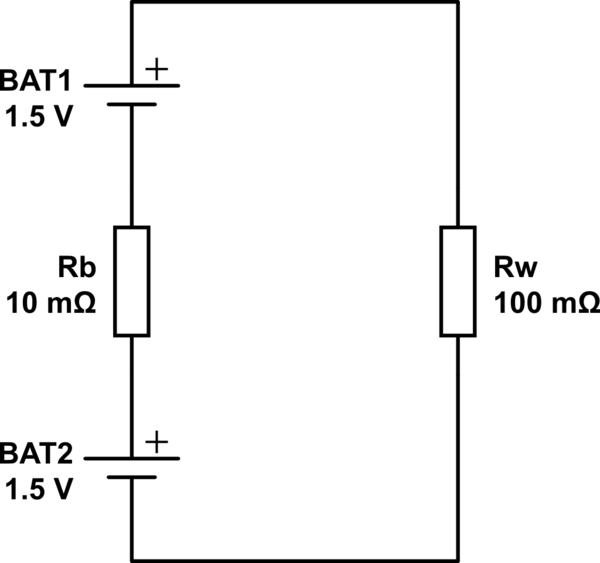 When you connect two batteries in series, why doesn't the middle short? The connection between the positive terminal on one battery and the negative terminal on the other battery has no load, so shouldn't it be shorted?

Figure 2. (a) No short-circuit occurs when the batteries are properly connected in series. (b) Attempted series-connection of two grounded batteries would result in a short-circuit as the current could flow through the ground connection as indicated by the red arrow. BAT3 is short-circuited while BAT4 is not.

But I don't notice heat or explosions or anything like that when I connect batteries in series.

That's because no current is flowing as in Figure 2a.

Because there is no closed circuit.

No, the net charge in a battery is zero! There is no surplus or missing charge at either terminal.

So shouldn't the excess electrons in BAT2 flow towards the positive terminal of BAT1, thus creating a current?

Current can only flow when there is a circuit. As shown in Figure 1 the circuit is open so no current can flow.

I thought a battery separates itself into two sides, one positive and one negative, with a barrier in between.

If that were true then batteries suspended by a thread around their middles would all line up due to electrostatic attraction. (They don't.)

A short (of the type that you mean, that causes high current and thus heat) is caused by a high voltage being directly connected to a low voltage.

The positive terminal of a battery is higher voltage with respect to its own negative terminal. But that doesn't give it any particular relationship to a second battery.

I think it is an excellent question given how basic electricity is taught in school.

To all those who answer "because the circuit is incomplete", you are correct of course. But remember that in elementary school, a battery is drawn as an excess of "+" on the positive pole and an excess of "-" on the negative pool. We are told that "+" and "-" attract. Now, the wire from the negative pole of one battery to the positive of a second battery, should of course provide a free path to give these to each other. Right? What's keeping them back? This "incomplete circuit" talk should not interfere with the simple model of plus and minus connecting.

Given the model that is presented to the students, this should be an obvious problem. And I am a bit surprised that the question seems to hard to understand.

The problem is in the model. A battery does not have an excess of + or - in a "room" waiting to be released as if it was cows in a pen. Even though it's often drawn that way to illustrate. Nor is a wire a freeway with electrons being cars.

A wire is better understood as a pipe with marbles. The pipe cannot have space between the marbles. Marbles being electrons. You need to shove one in the one end in order to be able to retrieve one out the other end.

With this model in mind it's clear that connecting two batteries are both pulling the marbles in the same direction, but the marbles still cannot move, thus not expending any capacity on the batteries. Hence also illustrating the need to complete the circuit. 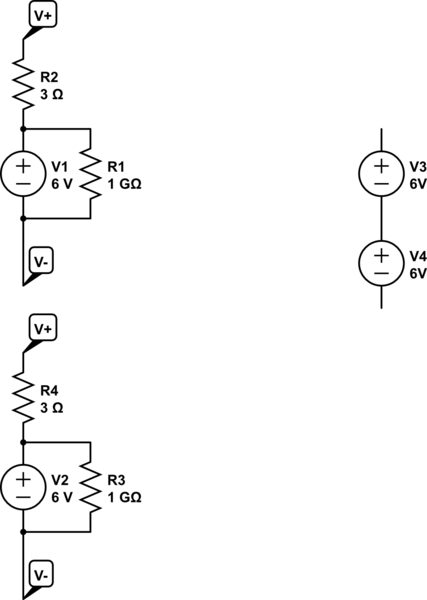 A simmilar case applies to batteries. The ways that a battery is not like an ideal source is:

So if you put two of the same batteries in series, it will double the voltage.

If you do this in the real world, it is important to match the batteries (which matches the series resistance, otherwise you can have more voltage running through one battery than the other and it will damage it or explode.

Im no pro but its easier than it looks bro. Please follow through. When you take one battery, you connect its positive with its negative together, it "explodes". But if you take two batteries, connect positive of the one with negative of the other, nothing happens. Why?

In the first case, you created a closed loop, a complete circuit. In second, the circuit is not complete because the two batteries have no relation with each other as you have not completed the circuit yet (i.e one terminal of the source connected to other terminal through some load/resistance). It will be complete once you connect the other two terminals, again ending up in an "explosion".

By definition, you are shortening the two middle terminals. You don't get heat or explosion simply because the circuit is not complete. I hope this was a little helpful. Stay Safe

Not the answer you're looking for? Browse other questions tagged batteries short-circuit series basic electricity or ask your own question.