Proof of the superposition theorem in linear circuit analysis

I couldn't find a proof of the superposition theorem from circuit analysis anywhere online. I thought it might be helpful to ask and provide my proposed proof as an answer to gather feedback and improvements. The superposition theorem I am referring to is the one that says if you only have "linear circuit elements", then the solution to the overall circuit, in the case of DC circuits at least, is the sum of solutions you obtain to variant circuits where only one source is left on (voltage sources become short circuits while current sources become open circuits).

A linear system in electronics means a system that can be expressed as a linear differential equation. Hence

This means that applying both inputs together is equivalent to adding the states for each input applied individually. For superposition of more than two inputs apply induction. 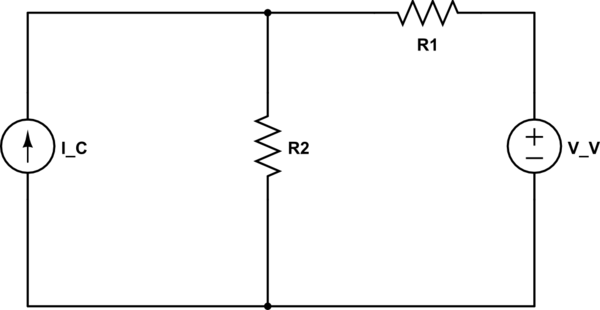 Let's motivate the general proof with a specific example first. Take a look at the attached circuit.

The key thing to notice is that solutions to the "turned-off" circuits, I will now call them the basis circuits, the solutions are all homogenous except for the equations that involve the one element that remains. That means when you add one solution from each basis circuit, most solutions do not affect the "in-homogenousness" of other solutions.

In general, we can say translate all equations that govern our circuit into several forms, and see that this line of thinking works.

For each node in the circuit not directly attached to a voltage source, The Kirchhoff current law gives us equations of the form $$ i_1+i_2+...i_k=I_{S1}+I_{S2}+...+I_{Sn} $$ where the lowercase i on left hand side denotes unknown currents while right hand side denotes any current source connected to the node. If there are no current source, it would just be zero. The basis circuits obtained by turning off all sources except for one would either leave the right hand side with 0 or with one constant left. The basis circuits obtained by keeping S1, S2, .. etc. would each contribute to each of the term on the right hand side. When you add the solutions of all of them, you can see that the final solution satisfies the above equation. This holds for all nodes.

Ohm's law is homogenous and relates v and i. So adding solutions to the basis circuits would also solve the Ohm's law equations for the full circuit.

This argument also holds for the other linear circuit elements such as inductors, capacitors, and could be extended if newer elements are discovered/created. As long as the equation governing the element is a linear function in voltage, current.

2
Circuit analysis?
12
How do I use superposition to solve a circuit?
1
Question about Circuit Analysis
1
Circuit Analysis in Non-Closed Systems
3
Intuition on Thevenin's Theorem
3
Analysis of unbalanced bridge circuit
3
How to analize an ideal diode circuit with sinusoidal sources and storage elements (inductors and capacitors)?
1
How to use nodal or mesh analysis with a current source?
4
What is wrong with this circuit analysis?