Why does 1/4 wavelength have a ground plane and 1/2 wavelength needs none?

Why does 1/4 wavelength have to have a ground plane and 1/2 doesn't?

Please could also provide source of relevant information, examples, books or scientific article, something like that.

I can't understand why we need to use a ground plane at 1/4 wavelength and 1/2 wavelength not needed.

Now, if you focus your eye at dead centre of the picture you will see that the voltage is always zero volts. This is because a dipole is optimally driven with a balanced voltage source (\$V_O\$). A balanced voltage source is preferred for a dipole antenna. In fact, the voltage and electric field is zero all along the length of the green line below: - 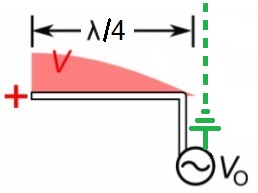 And, not surprisingly, it has one half of the impedance presented by the half wave dipole. But, to keep the same radiation pattern you need to "force" an earth plane that does what the green line does.

A quarter wave monopole antenna doesn't have to have a ground plane... unless you want it to radiate EM energy with a certain efficiency and pattern.

EM radiation requires accelerating electrical charges, which usually implies a voltage differential between two separated areas in space. A conductive ground plane is a particularly good region of voltage differential from the voltage on portions of a (short) monopole antenna.

Otherwise the voltage differential will occur somewhere else, for instance around the hand, arm and body of a person holding a VHF HT radio with only a quarter wave whip or "ducky" antenna. And your body is not as efficient a counterpose as a conductive ground plane.

With a half wave dipole antenna, each half acts as a nicely balanced counterpose for the other half, splitting the oscillating voltage differential between the two equal length halves, which leads to a nice symmetry in the pattern of the EM field, which helps create a more predictable RF (near and far field) radiation pattern. A conductive ground plane under a quarter wave monopole leads to a similar symmetry in conjunction with the EM field's mirror image.

If there is no ground plane (or other well designed set of counterposes) under a short vertical, that leads to the RF voltage differential being between various often randomly placed conductive objects (feed lines, radio case, ground straps, power supply wiring, rain gutters, and etc.) and lossy dirt. Which leads to an unpredictable antenna radiation pattern, ground losses, and possibly shocking "RF in the shack".

The ARRL Antenna Book and Antenna Physics book have information on this subject. Also many many textbooks on electromagnetics and antennas.

A vertical quarter wave whip with ground plane applies a common trick in practical electromagnetics. The ground plane generates the mirror image of the whip and that mirror image behaves like it was feeded by inverted signal. The result is like a vertical half wave dipole in free space.

Theoretically the ground should be a large planar surface but even a bunch of separate rods which are connected to the shield of the feeding coax cable do the work acceptably.

If the ground plane is horizontal and the whip is vertical the resulted antenna directs the signal horizontally 360 degrees around the whip axis. The wave in the far field is vertically polarized (=vertical electric field). The communication would be weak with a station which has a horizontal half wave dipole.

The ground mirroring is true also with a half wave dipole. It's utilized in long distance short wave radio communication as a method to direct the beam a little upwards to get effective ionosphere reflections. The elevation of a horizontal dipole is adjusted for wanted landing zone for the ionosphere reflection. The activity of the sun varies, so reading carefully radio weather forecasts is essential for optimal shortwave communication.

MW radio stations around 1MHz often have vertical whips. The ground plane is the real ground.

Why does 1/4 wavelength have to have a ground plane and 1/2 doesn't?

Here's how I think of it, a 1/2 wavelength dipole is just two 1/4 wavelength antennas back to back, and either can be considered the whip or ground plane.

Or, they are both in actuality the same antenna only with different optimizations and compromises on getting the desired polarization, impedance, and directional characteristics. With the 1/2 wavelength dipole both elements are identical. With the 1/4 wavelength whip one element is a wire and the other a plane or cone. There's actually many variations on this theme, it's only that these two are the most common. Calling one 1/4 wavelength and the other 1/2 wavelength isn't exactly a precise description of either, but that's how we describe them and think of them because in practice this describes the most prominent dimension on how much space they take.

We might call these 1/4 wavelength antennas a "monopole" but they aren't, there are always two poles. With electromagnetic devices there is no north without a south, no left without a right, no voltage potential without a ground reference. The reason that these antennas are described as 1/2 wavelength is also a bit arbitrary, it's as long as it has to be to reach the two points of zero current flow for the frequency of interest.

Once I have come to understand that much of this is simply half arbitrary nomenclature then I don't worry about it too much. Perhaps it may be best to just learn the conventional names of things, keep the equations used for design where you can find them, and not worry too much on why it is the way it is. It's worked for me so far.

Not the answer you're looking for? Browse other questions tagged antenna microwave wave ground-plane wavelength or ask your own question.

4
DVB reception: Why do I need to add a coaxial cable to my installation to improve SNR of the signal?
3
Where is the positive and negative on a telescopic antenna?
0
Why dimension of antenna's elements can be 1/2 and 1/4 or wave length and what about 1/3 or 1/8?
0
Does a radio antenna need to form a closed loop to function?
0
Why monopole has half of the impedance than dipole by current integration

4
How do components on a ground plane of monopole pcb antenna effect radiation/efficiency?
1
Explanation for: A monopole antenna must contain a resistor (or equivalent) and therefore must have 2 terminals?
2
GPS antenna ground plane design considerations and limitations
4
Does RF chip antennas require top/bottom ground plane to operate?
2
Extending an RF ground plane outside a small PCB
0
Antenna conterpoise or ground plane. Confused about length requirements
0
Why dimension of antenna's elements can be 1/2 and 1/4 or wave length and what about 1/3 or 1/8?
2
Aluminium foil as a ground plane for 900 MHz antenna