Role of the neutral conductor in three phase systems

In a symmetrical and balanced three phase system no current flows on the neutral conductor.

Obviously the real electric power distribution systems are not perfectly balanced, so there is a current on it. But it seems to me like a parasitic effect, which is due to the fact that I connect devices which are different from those of other people etc.

But, at least in Italy where I live, we receive from the electric power distributors two wires which are the phase and the neutral (and this one is about at the earth potential). So, the neutral is designed to let the current flow on it (and so it is not a parasitic effect due to the fact that the load is not balanced). So, which is the role of the neutral conductor?

In a single phase system neutral and line wires provide a potential difference over the load that is to be powered. Neutral is commonly earthed, connected to the earth, at some point in your house. Because of this the neutral wire is at the same potential as the ground we are connected to making it typically less dangerous.

The connection between neutral and earth allows any phase-to-earth fault to develop enough current flow to "trip" the circuit overcurrent protection device.

It may help to visualize the waveform in polar coordinates. The radius is the same all around, indicating each phase magnitude is the same. Each phase is seperated by 120 degrees. 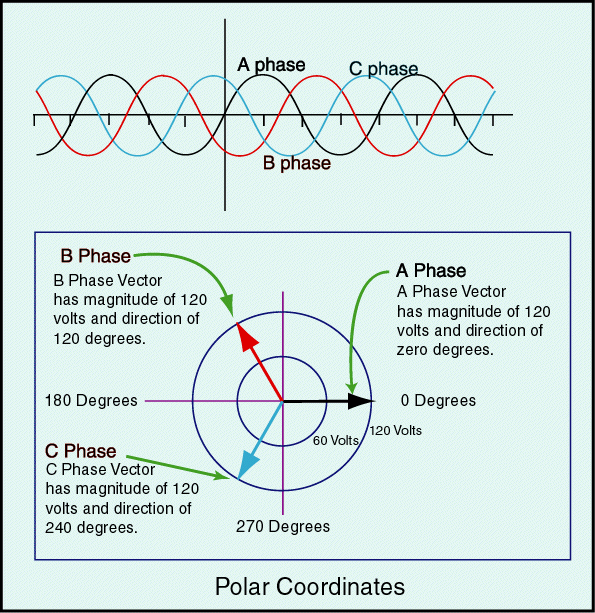 AC is always pusing and pulling current so it can be positive or negative at a particular instant. We can do a calculation to illustrate how a balanced 3 phase system would leave no current on the neutral phase.

So the following is true,

where I_x is the instantanious current at one time. Also if each phase is an ideal sine curve then

where theta is the phase shift. So,

It depends of the connection. You could use each of three phase separately with neutral wire, or use "balanced three phase system".

Not the answer you're looking for? Browse other questions tagged three-phase electrical electricity energy neutral or ask your own question.

3
What causes unequal phase-to-neutral voltages in three-phase distribution systems?
10
How is transition from three-phase distribution without neutral to three-phase consumption with neutral achieved?
0
Three-phase system question
0
How to calculate the neutral wire size of a home (department)?
0
Is balancing the only mechanism that regulates the phase currents in a three phase system?
0
Symmetrical three-phase power flow problem, √3
0
What is the difference between a rupture and the neutral conductor not existing from the start in star three phased system?
0
Figuring out neutral and earth in a three phase connector?
1
Converting single-phase to three-phase for City & Guilds 2391 practical