I am designing a PCB in Kicad and I can define any diameter and hole of a via, but when I send it to be manufactured in china (JLCPCB, PCBWAY, etc) they can put any size of via or will it adjust to the closest value they have? The via I'm using must carry 5A, what standard value do you recommend? with a diameter of 1.6mm it should be enough but I am not sure if it is a commercial value

One approach is to use the minimum size for minimum cost PCB if that works for your design. For example, for PCBWay there is a delta between 0.3 and 0.25mm for regular FR-4 boards, so if you can use 0.3mm or larger for all your vias it will save a bit of money (or a lot of money if you're tempted to use very small vias). The next steps are at 0.2 and 0.15mm.

For higher currents such as 5A you can refer to the design guides that many manufacturers supply. Probably 5 0.3mm (~12 mil) vias would be fine, according to this King Sun data assuming 10°C rise is acceptable. According to this calculator your suggested 1.6mm hole is also fine. They don't specify the rise allowed in their calculation though. Altium claims:

As long as your PCB traces are sized according to the minimum trace widths specified in the IPC 2152 standard, and your vias are sized to comply with DFM standards and applicable IPC standards, you won’t have to worry about temperature rise in your vias. The excess heat in the interior of the via gets dissipated into the substrate and the nearby traces. In the case where the traces are very wide, they have a larger surface through which to dissipate heat compared to the via. In this case, the heat leaves the trace at a faster rate than it leaves the via, thus the trace will reach a lower equilibrium temperature. This was confirmed in the experimental study by Douglas Brooks and Johannes Adam in SIJ.

Generally you can request any size hole you want, within the capabilities list, and they will produce the holes within the specified tolerance after plating. For example, for PCBWay a 0.6mm drill results in a finished hole size between 0.52mm and 0.68mm. 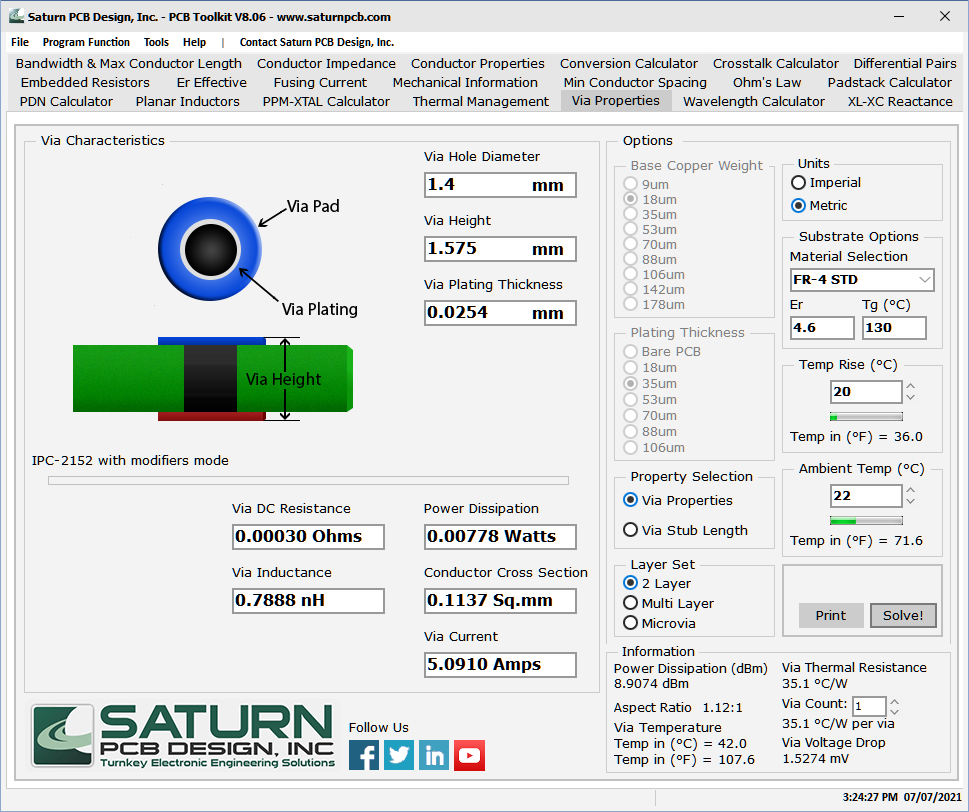 Using teardrop trace to via connections for large pads makes them more rugged.

The board shop doesn't know or care whether a hole is for a via, for a component lead, or for a mounting hole, or just for ventilation - regardless of your purpose, to them it is just a hole to be drilled, so when specifying a hole size for any purpose, you must follow the shop's requirements for hole sizess.

15
Is it a bad idea to use 2 vias to change layers in power tracks?

15
BGA escape via dimensions at 0.8mm pitch?
5
PCB Design: What is the minimum value of Via Dia and Via Drill size?
1
Choosing a via for automated PCB assembly order
1
Creating a slotted & plated through-hole in EAGLE: where to draw milling outline
1
Will PCB board house accept this QFN thermal pad via design (KiCad)?
1
Tiny PCB fiducials?
1
What are the concerns of vias-in-pad on flex PCB without filling?
0
KiCad: Show keep-out/clearance around mounting hole
0
Via stitching in PCB design