Ask Question
Asked 2 months ago
Modified 2 months ago
Viewed 56 times
-1
\$\begingroup\$
Closed. This question needs to be more focused. It is not currently accepting answers.

I need to supply logic 1 or 0 (selected by a DIP switch) to NAND gates. Input 'A' & 'B' are inverted to each other. My Question: 1: Is the below circuit okay or its better to use inverter IC on A to supply B?

2: Is there any difference in using pull-up vs pull-down resistor in this case?

3: what can the max R1 value be? I want to have minimal current draw (when the switch is ON for logic '1') through the pull down resistor.So I should use the highest resistor value ?I know R1 is determined by the type of NAND chip (CMOS /TTL), so next question which chip should I use? My application will have regulated 5V supply and won't be >1KHz operating freq.Just need low power consumption. Is the selected 74HC132 okay?

Sorry for the basic question but I am just trying to understand the basics to actually implement my design from proteus simulator to PCB. 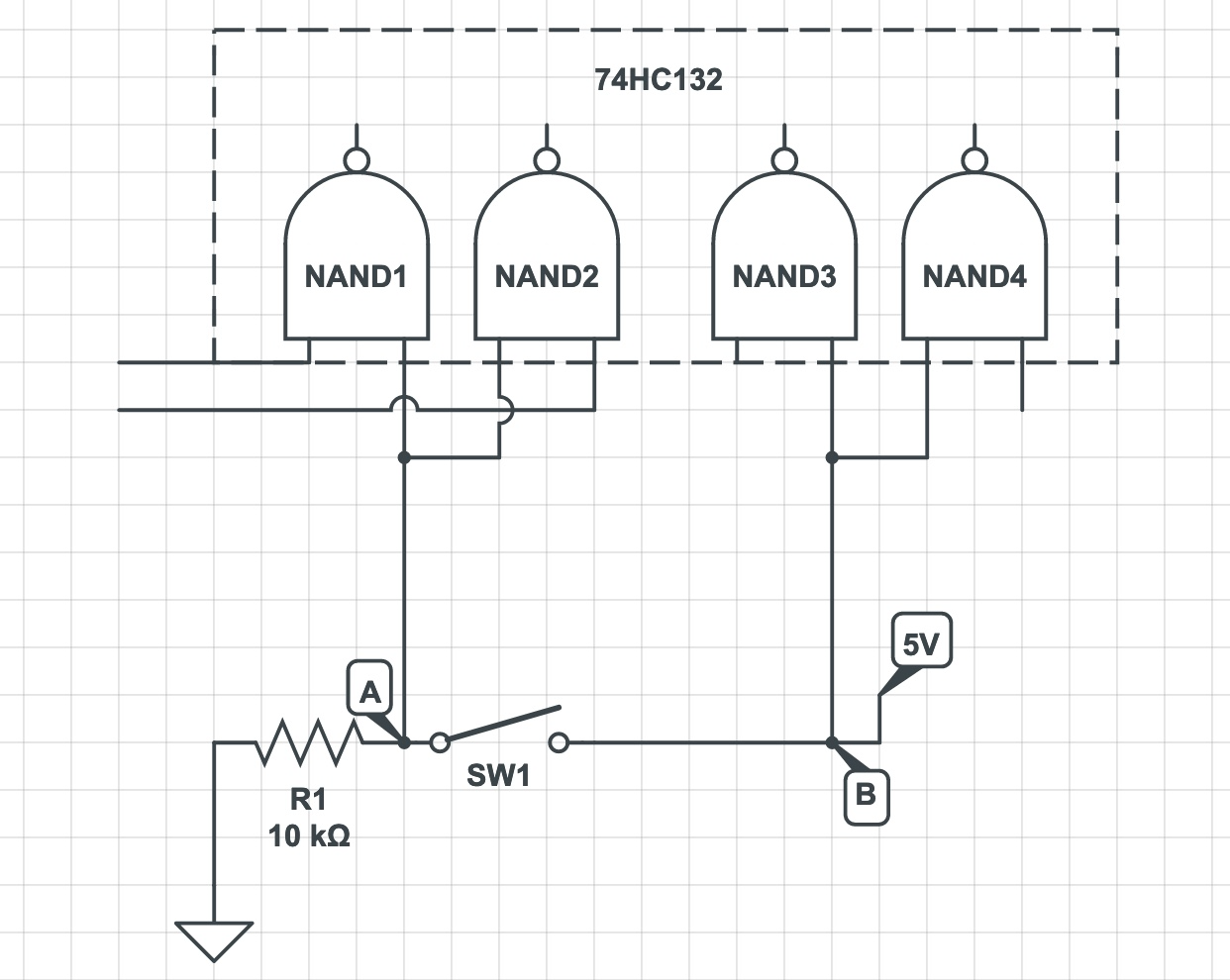 EDIT: just found out that Input 'B' will always have 5 V. So I will need another DIP swicth-pulldown resistor combo OR invert 'A' to supply 'B'.

As already in the comments, the circuit as is has an issue with B always being high.

A 2nd switch will add another pull up/down resistor and minimum current being the objective. But an extra inverter adds small load current as well. Other 2 switch considerations, could something bad occur if B is not the inverse of A? This would make 2 switches undesirable as they could be set to violate this need. Obviously an inverter is cleaner.

The maximum resistance will be a function of the input leakage current expected and VIH VIL (or for the Schmidt device mentioned VT+ VT-). Basically the resistor must be capable of actually pulling the voltage to the permitted range. Maximum input leakage current is 1uA per pin (+85C) but x4 s there are 4 pins used so 4uA. Worst case tolerable voltage drop based on VT- = 0.9 (Vcc=4.5V). So Rmax = 0.9/4uA = 225kOhms. BUT this does not account for wiring/switch leakage and that is harder to estimate, so the value used should be lower.

(A bit of irony; the PC I'm typing this on has its power switch disconnected from the motherboard as it is a very leaky 60kOhms and would randomly turn the PC on and off. Clean dry environment but many years of use)

As to pull up or down, assuming the input will spend equal time set high and low, it makes little difference. But if the switches are more commonly in one state then the switch should be configured such that it is open in this state. In the above circuit if A is mostly going to be set low then R1 is wired optimally.

Not the answer you're looking for? Browse other questions tagged logic-gates push-pull or ask your own question.

2
Pull down resistor on logic gate input
1
How to create high voltage levels for high side input of a driver?
2
Logic gates that does not need to to tie to 1 k resistor and ground open inputs to drive it low
3
Pull-down resistor confusion
1
GPIO push/pull and pull-up resistor?
0
Connecting logic gate input pin with pull up resistor to another driver input pin doesn't keep the voltage
3
Limiting logic gates input current with serial resistors reading their electrical characteristics
4
What pull-up or pull-down resistors to use in CMOS logic circuits
2
What is the most efficient way to invert digital signal? NPN, MOSFET, logic gate