I have a resistive sensor that I'd like to use to generate an amplified voltage in a small range. I'd also like to shift/offset that range up and down with the use of a DAC to kind of "zoom in" to pre-defined regions during operation using an op-amp.

I should also note that the sensor does not inherently have any AC component and is not expected to change quickly (similar to a thermistor reacting to temperature changes).

I came up with this circuit to test: 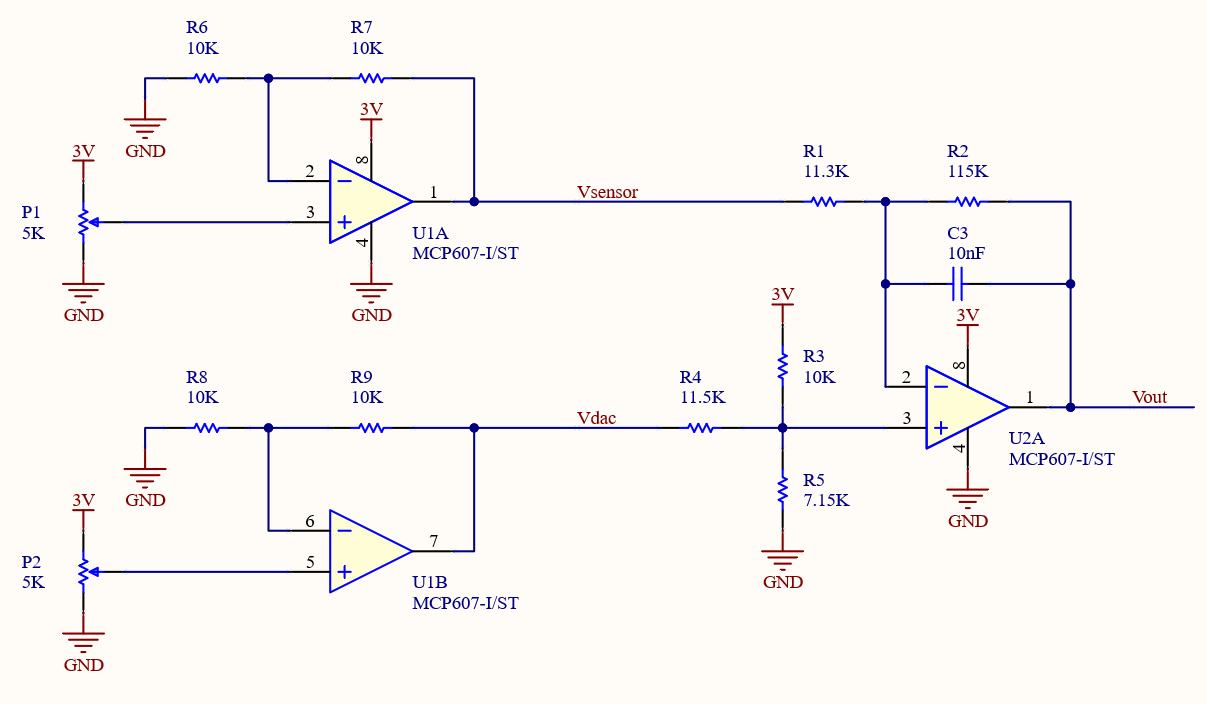 After some initial troubleshooting, I realized I was exceeding the upper input common-mode range of VDD–1.1V=1.9V which is why I added U1, R6, R7, R8, R9. This allowed me to measure ~0V to ~3V for "Vsensor" and "Vdac" and test "Vout" at specific ranges.

After running through several values of "Vsensor" between 1.57V and 1.85V for a constant "Vdac" of 2.9V, I noticed the error between the theoretical and actual "Vout" was poor - as bad -38%. I realize this is outside of the opamp linear spec, but an -18% error when Vout=0.15V seems too high when I expect it to be in the linear range. 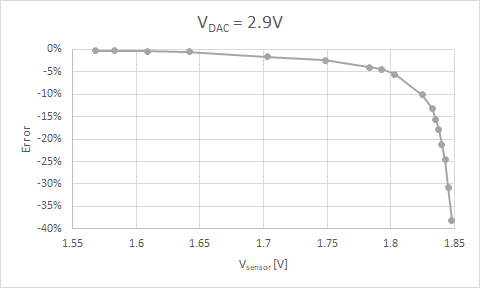 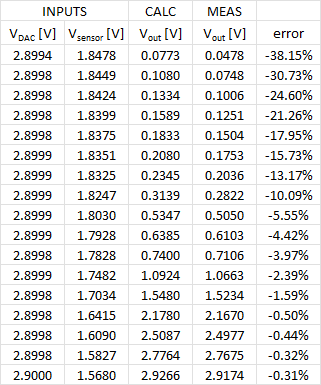 The MCP607 datasheet states the maximum input common mode voltage is 1.9V (for 3V supply) and I applied ~1.69V so I don't suspect that is the issue. It also states the output voltage is linear when it is at least 100mV away from the rails.

I tried adjusting the values of R3, R4, R5 so that the parallel resistance is close to R1||R2 with the thought that the input bias currents could be leading to additional input offset errors. Although the error was not improved, the sign was opposite (now Vsensor was 30% higher than expected).

I could use some help in troubleshooting. Any ideas what could cause this? Perhaps I'm not considering other key specs in the datasheet?

EDIT: I removed references to "difference amplifier" and instead called it op-amp

UPDATE: I tried removing the capacitor (C3), cleaning residual flux from pcb, and even removed U1 and connected PSU directly to "Vsensor" and "Vdac". Unfortunately, the error remained high at 25%. I input my values that I listed above into a PWL to simulate in LTspice and saw the worst error was ~2% and averaged ~0.6%. My search continues.

UPDATE: Rather than post my own answer and close this discussion, I decided to post an update to see what further contributions/improvements could be made. Furthermore, I still have more testing to determine if this behavior will be acceptable. Once that is complete, I will post an answer and close the discussion.

TLDR; By eliminating the trimpots and the amplifiers after them, I was able to reduce the error from ~30mV down to ~10mV.

After reviewing all the responses, I took a step back and tried to think through this again. To try and simplify the test setup as much as possible, I removed U1/R3/R5 and shorted R4. Then I connected alternate PSU channels directly as "Vsensor" and Vdac". I was happy to see that the measured "Vout" was within 3mV of the expected value throughout the range.

After further review, I believe part of my issue was with the trimpots themselves since I noticed them drifting a little over time. They are multi-turn ones but residual internal tension and disturbances while taking measurements may have caused the wiper to move slightly. The following 2x gain stage would only make it worse. Since I took my measurements one at a time with ~10s of averaging, there could've been enough time for things to change enough to be problematic.

I eliminated the pots and U1, restored R3/R4/R5 back to the original values, and connected my PSU as the two inputs as follows: same as OP but without pots/U1 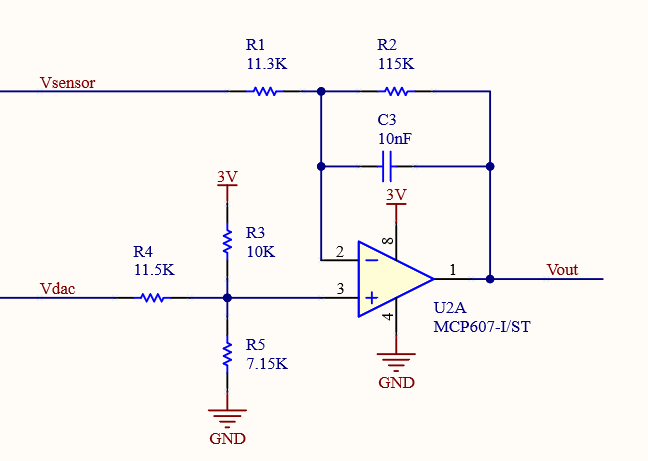 After testing multiple points in three ranges: results in table and chart formats The parts in green are meant to signify when "Vout" is in the linear range (at least 100mV away from the rails). 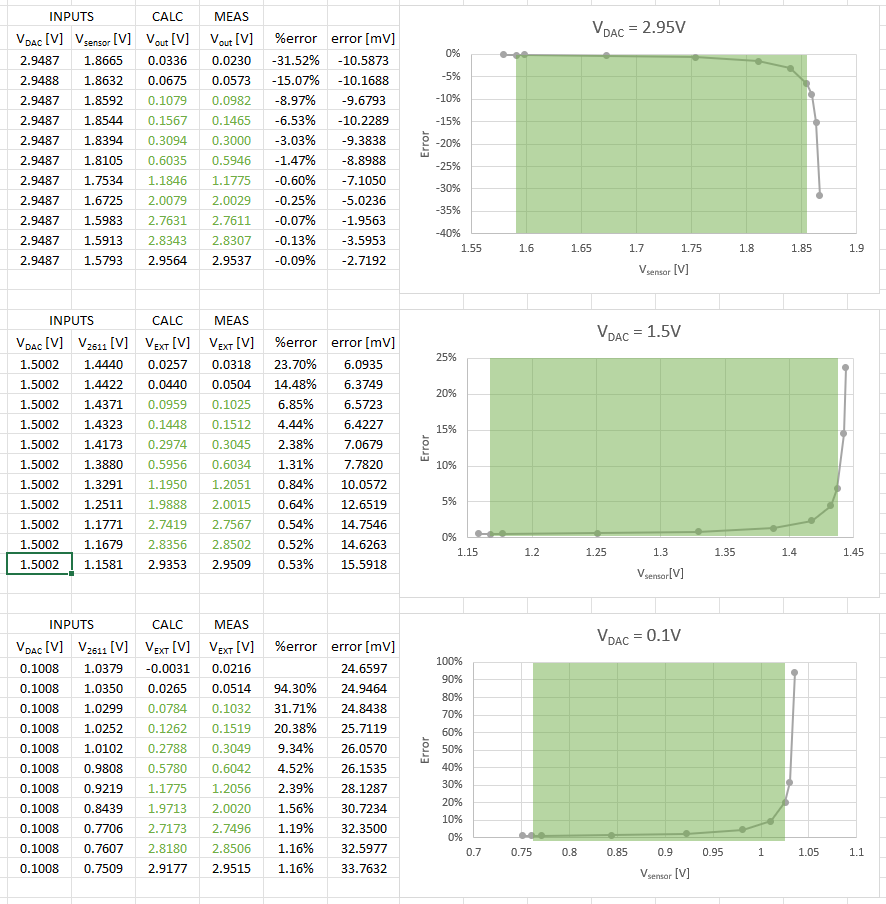 As @Jonk and @Spehro Pefhany mentioned above, the resistor tolerance also contributes errors. Moving forward, I'll look to incorporate a more stable reference voltage rather than base things off Vcc. I may also consider using 0.1% resistors.

Thank you, everyone, for your help!

As stated above, I will still test and look for further improvements and welcome any additional feedback that might arise. Once I complete my testing and am confident the issue has been resolved, I'll close the topic.

I could use some help in troubleshooting. Any ideas what could cause this? Perhaps I'm not considering other key specs in the datasheet? 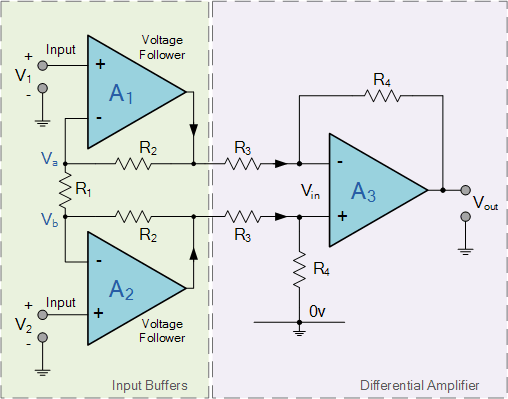 Just because the system is made of only linear components doesnt mean the response will be necessarily linear.Take this circuit for example: 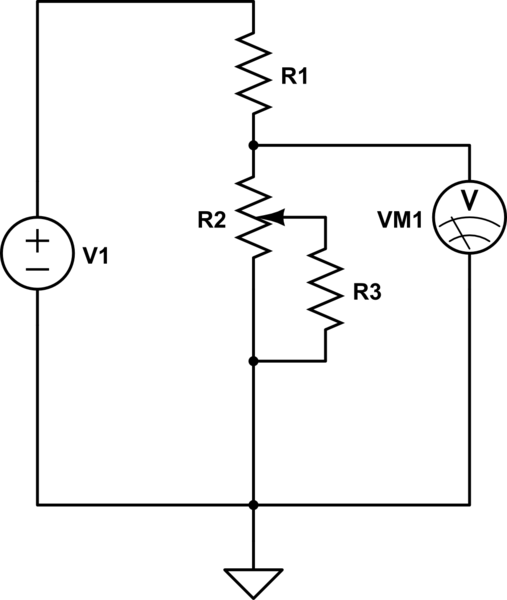 Your calculation of error as a percentage of voltage is more than a bit misleading (and nonlinear).

It's about -30mV for small outputs decreasing to about -9mV for outputs near the positive rail.

As a percentage of output range, then it's -1% to -0.3%. Pretty much what you'd expect with 1% resistors and without measuring the 3V offset reference (which has a bit more effect on the output than Vdac).

A 1% error in Vcc (2.99V rather than 3.00V) will more than account for the 30mV shift. Typically you'd want to use a very stable reference rather than the supply voltage, or get rid of it entirely since you have a DAC feeding the offset.

Since the original question was about linearity and you're still using the % reading .. based on the first group of additional data posted, here is the deviation from linearity of your error (from a least-squares fit). Seems to be well within +/-0.04% F.S. 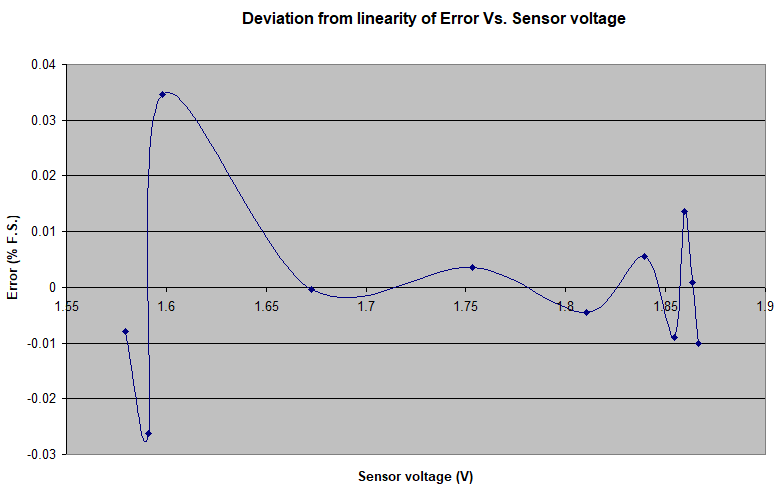 U1A and U1B are configured for a gain of 2. They are trying to make a 6 V output while powered by a 3 V source. That will not work.

A conventional, non-rail-to-rail opamp needs around +/-2 V of headroom above and below the maximum signal excursions to meet published performance specs (older ones more, newer ones less). The signals at pins 1 and 7 have a max range from 0 V to +6 V, so the power rails would have to be +8 V and -2 V, not +3 V and 0 V.

The same applies to U2A, which looks like it has a forward gain of just over 10 for the Vsensor signal.

I'm not familiar with the MPC607, so its headroom req might be less. True R-R opamps have lower headroom requirements, but the power rails always must exceed the required signal swing, even if only by 0.1 V.

Not the answer you're looking for? Browse other questions tagged operational-amplifier distortion non-linear or ask your own question.