Do the recombination of charge carriers cause the diode to stop conducting?

This might be a stupid question but I am either having a mental block or I'm getting something. I'm learning about excess minority charge carriers.

So, when an electric field is applied across a pn diode (in such a way as to decrease the depletion layer width, i.e. forward biased), the carriers move from their "majority" sides to their opposite, "minority" sides.

As the length travelled increases, more and more charges recombine with their opposites. So in short diodes, the charges go straight across to the "wire"/contact with only a few of them recombining.

But in (say very) long diodes, the excess charge carriers recombine with their opposites (almost) fully. So then, how is charge carried across the pn diode?

Can anyone shed any light on where I'm going wrong?

I found a diagram showing this here: 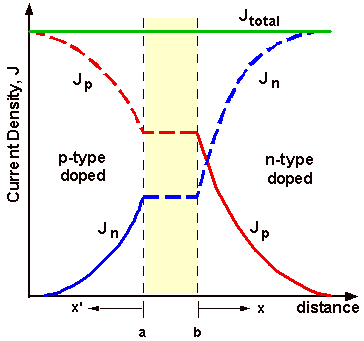 Not the answer you're looking for? Browse other questions tagged diodes charge semiconductors solid-state-devices or ask your own question.

44
Why isn't there a potential difference across a disconnected diode?
5
Understanding the PN-Junction Built in Voltage
-1
What is the difference between rectifier/signal diode and zener diode?
1
current of forward-biased pn junction
2
How charge moves through a diode during the reverse recovery time?
1
PIN-diode lowest operation frequency limitations
14
Perpetual machine from a PN-junction diode
5
Current-voltage characteristics of silicon carbide luminescence
0
Explanation for drift current
2
What is the exact meaning of 0.7V voltage drop in a forward-biased diode?