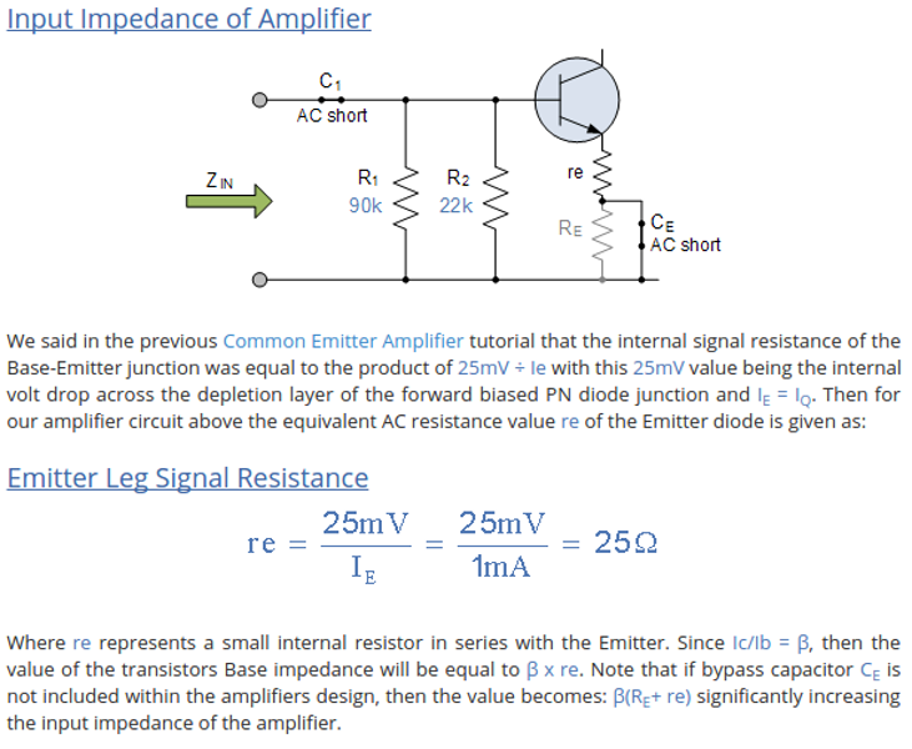 My recommendation: Forget the link which gaves you the above information, which is false resp. misleading. (By the way: This link leads you to other "explanations" which also are wrong). Hence, you should not blindly trust any information available in the internet.

The text says that the "25 mV value being the internal voltage drop across the depletion layer of the forward biased pn diode junction". That`s pure nonsense.

This value of 25 mV is the so-called "temperature voltage VT" which depends on the environment temperature and appears in the exponent of the e-function describing the relation between the controlling base-emitter voltage and the emitter current.

And what about the "resistance" re, which appears in the above figure outside the transistor?. In fact, it is NOT a resistance - it is the inverse of the transconductance gm=1/re - and some people prefer the use of re instead of gm. Note that the transconductance gm=d(Ic)/d(Vbe) is nothing else than the SLOPE of the transfer curve Ic=f(Vbe) - measured in the selected DC operating point.

More than that, it can be easily shown that the slope d(Ic)/d(Vbe) is identical to gm=Ic/Vt (VT: temp. voltage); this gives you the relation between gm=1/re and VT.

Hence, gm is the most important parameter which determines gain. It relates input voltage and output current (therefore, it is called "mutual" transconductance gm). This can be seen in the known gain formulas (common emitter):

(a) without feedback: Gain=-gm*Rc
(b) With feedback (emitter resistor Re): Gain=-gmRc/(1+gmRe)

EDIT: Differential input resistance at the base node (without feedback resistor Re):

1
BJT Amplifier Input/Output
11
Is the input impedance of an operational amplifier (op amp) infinite or zero?
0
Can you increase the input impedance.?
3
Reasoning behind values of CE amplifier
0
Why are both bias resistors considered parallel in a common emitter amplifier?
1
Why does the common collector specifically have a high input impedance?
2
Regarding symbols used for current amplification factor
1
How to estimate the voltage gain, Input impedance, current gain, power gain, and output impedance for the amplifier in the fig?
1
Help understanding the SPICE input impedance - why does it seem lower than I expect?
1
What is the physical significance of beta and alpha in BJT?