P.S. : This is a school project for my logic lab class. I don't want a full answer but any help would be appreciated. I really couldn't understand how to start. Thanks in advance. 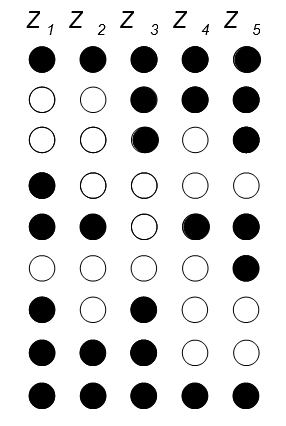 You want to generate this sequence right?

For that start with truth table.

If you need more clarification let me know.

The idea here is to design a circuit that goes from one state to the next (line of Z_i values) on a clock edge or possibly clock edge plus enable input.

You can also build a special form of Moore machine called a Medvedev machine. It's a Moore machine where internal state and output coincide, i.e. they are the same.

Starting with a binary counter can be useful if you have the luxury of using a look-up table (LUT), where you provide an address into a piece of memory that outputs as many bits as you need in parallel. For hand-coding, it might not be the best starting point.

To find a proper encoding for your internal state, you would typically look at your output values and devise a clever way to reduce it. Find duplicate bits (groups of bits that are always the same per state), find symmetries, etc.

In your case, one thing that's immediately obvious is the symmetry in your states.

Immediately, this means that you can use one bit in your internal representation to just switch all outputs around. Your pattern has a circular nature, so something like a Johnson counter comes to mind: state output state output

Notice how the inversion reduces your state space:

You can now use Karnaugh maps to simplify your expressions. Then plug the multiplexer equations into your output logic expressions and you should be done.

Notice how this is one possibility. You could use a binary counter, you could use random states to get started etc.

For instance, logically, since none of your lines are the same, you technically only need ld(#states) bits to encode the information. This has the advantage of saving one flip flop. The disadvantage being that you have to devise state transition logic as well as output decode logic now.