Regarding Altera's MAX10 Cpld, I got some questions regarding the interface of this CPLD with 3.3V devices.

Looking at the AN447 document, it mentions on page 2 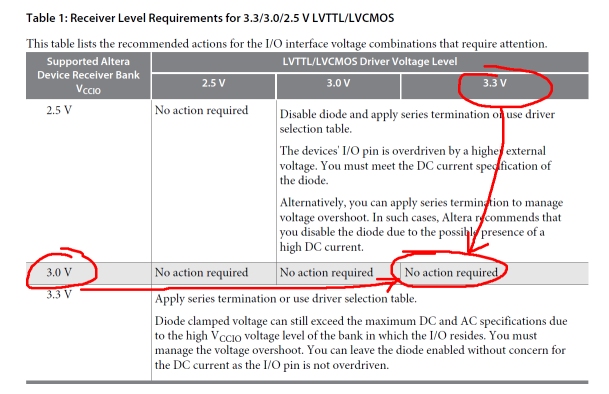 To my understanding, if VCCIO is set to 3V, there is no need for anything to be done when it comes to interfacing with a 3.3V device.

But that makes little sense to me, I don't understand the reason why when VCCIO = 3V, then all issues are solved:

Thanks for your inputs. I'm sure there is a big misunderstanding there and I want to clear that out.

With an un-terminated line that is long enough and driven fast enough, there is a potential for overshoots with voltage level high enough to exceed the rating of a MAX10 input.

With Vccio=3.0V, the MAX10 I/O should interface with 3.3V without issue. The Voh could be lower than when Vccio=3.3V, but it should still be high enough for 3.3V logic that I know of. Of course, verifying an interface matches in levels is part of the design process regardless of whether using 3.0 or 3.3V as Vccio.

Some possible reasons for using 3.3V instead of 3.0V:
3.3V is already required somewhere else, so using 3.0V creates a requirement for an extra voltage source.
Lines are short enough or not driven hard enough that overshoot is not an issue.
When overshoot can be an issue, controlling it with series termination may be preferred anyway because that also reduces EMI effects.

See this table from the datasheet (sorry its small, click on it for a better view). The table is the same for LVTTL with the exception of \$ V_{OH} \$ which would be 2.8V (which is still larger than 2.4V) so it really wouldn't make a difference for almost all applications.

For LVCMOS however the current requirements are different between 3.0V and 3.3V. So there will be fanout differences between 3.3V and 3.0V.

Other than that there are a few hysteresis timing differences between 3.0V and 3.3V for Schmidt triggered outputs.

It should be fine in most applications interfacing 3.0V and 3.3V. Since there is variability in devices, its a good idea as a digital designer to check each output pin and when the pin is 'on' check the Voh and make sure its going to meet the minimum Vih of the receiving devices logic. Same thing when its 'off' with Vol and Vil. Then check the fanout current and make sure you have enough current to drive the receiving device (or devices) current requirements.

Another note, Quartus needs to know what the voltage level is for at least three reasons:
1) So it can select the appropriate pull-up resistor
2) So it can set the right PCI clamp diode
3) So it can determine receiver timing with the included tools. 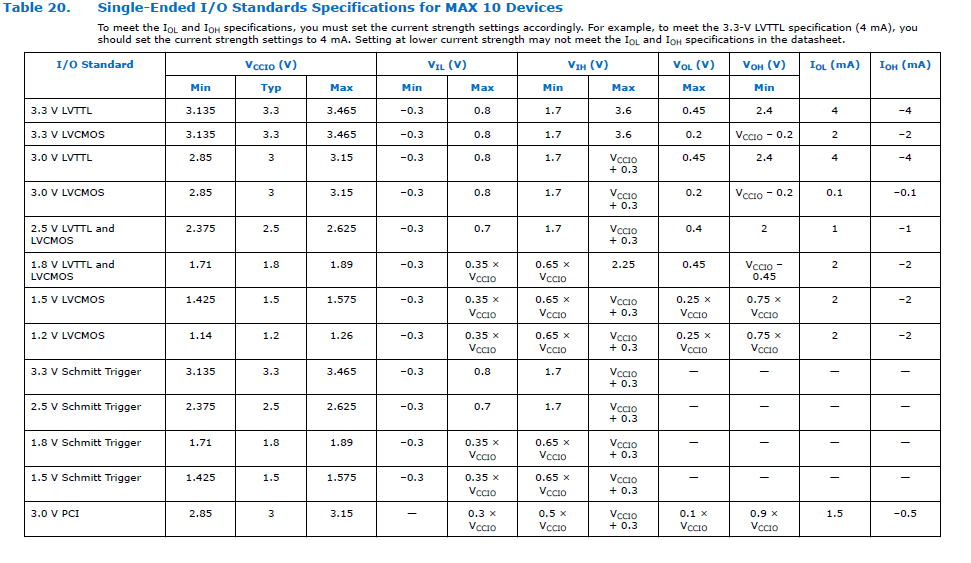 Fanout won't damage the chip (if you have a Voh and too much load it will drop the voltage). Overvoltage can. You can see that the 3.3V LVCMOS and LVTTL have a Vmax of 3.6V, don't exceed that. For 3.0V LVCMOS and LVTTL Vmax is 3.3V, so its right on the boundary and there is no margin, I wouldn't be comfortable with that as a designer if I had a low impedance source. If the input goes above (its a diode curve so the higher it goes the more current it draws) 3.3V then the diode will turn on and start sinking current, how much current depends on the source (device). It becomes a problem if the diode heats up beyond its thermal rating. So if you can keep it below the tables recommended 3.3V for a 3.0V voltage then you are good to use a 3.3V device.

In the past with microcontrollers I've used current limiting resistors or external diodes (or both) to limit current when the input voltage is too high.

As far as overshoot goes (which means short transitions) , the datasheet says this, so in the short term the inputs can take some abuse:

1.1.1.2 Maximum Allowed Overshoot During Transitions over a 11.4-Year Time Frame During transitions, input signals may overshoot to the voltage listed in the following table and undershoot to –2.0 V for input currents less than 100 mA and periods shorter than 20 ns. The maximum allowed overshoot duration is specified as a percentage of high time over the lifetime of the device. A DC signal is equivalent to 100% duty cycle. For example, a signal that overshoots to 4.17 V can only be at 4.17 V for ~11.7% over the lifetime of the device; for a device lifetime of 11.4 years, this amounts to 1.33 years.

Not the answer you're looking for? Browse other questions tagged intel-fpga programmable-logic 3.3v max10 or ask your own question.