How to find the voltage of a capacitor in a Op-amp + RC network?

I found this practice problem online which asked to find the voltage across the capacitor as a function of time. The circuit is: 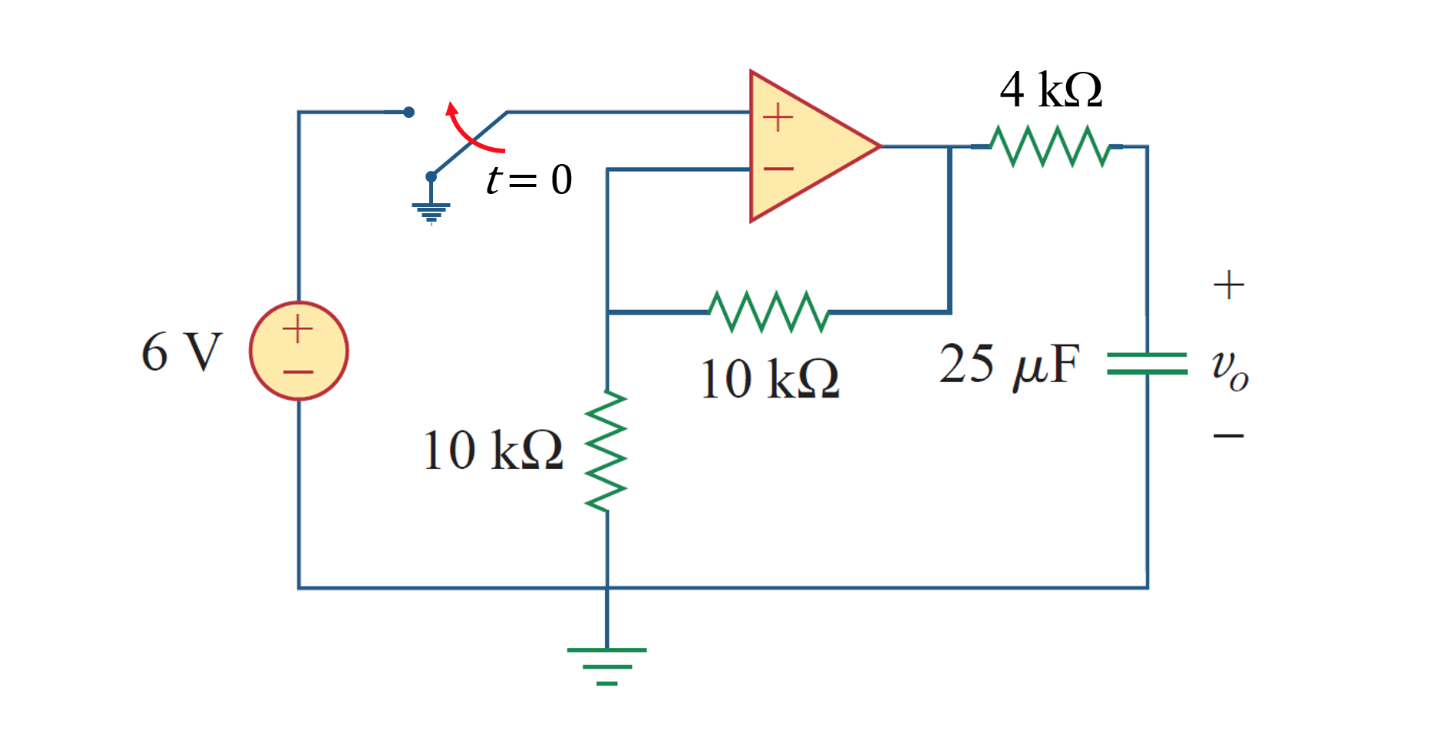 To find the initial condition, I'm trying to do nodal analysis at the top right corner (right after the 4 kilo-ohm resistor.

I know that the voltages from the two terminals of the op-amp are going to be the same(assuming ideal op-amp as given in the problem). Since the wire connecting the positive terminal of the op-amp is grounded, the node potential at the negative terminal is also zero volts. As a result, the current through the bottom 10 kilo-ohm resistor is zero amps. By KCL, we know that no current can be flowing into point between the 10 kilo-ohm resistors which means that there is no current flowing to the top right node? So is initial condition of \$ v_o = 0 \$?

I would check but the website didn't provide an answer key

Edit: After doing some work to find out the voltage across the capacitor as a function of time.

We have \$ V_c(t=0) = 0 \$. Now looking for the equilibrium voltage when the switch is closed, we know that after a long time the capacitor will look like an open circuit. Therefore, the voltage across the capacitor is the same as the voltage from right before the 4 kilo-ohm resistor to ground.

Let's find the voltage by doing nodal analysis at the node right before the 4 kilo-ohm resistor.

We know that the voltage at the two terminals of the op-amp are now 6 volts (since the switch is closed).

KCL at the node right before the 4 kilo-ohm resistor(let's call that node e):

This exercise is really good because it covers a lot of material in a seemingly simple question. Most of the work you did is good (except getting the sign of e wrong), but you missed a key aspect, as you'll see.

Forgive me for redrawing the circuit with some extra labels, because it's going to make things a lot easier to refer to later. 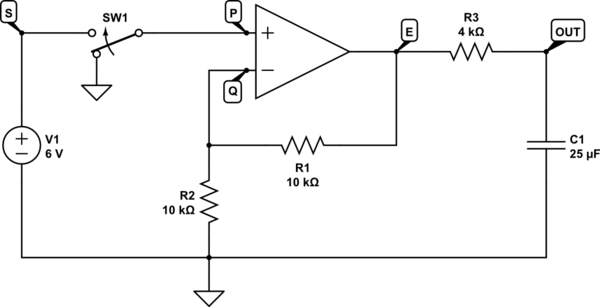 By the way, usually we don't refer to the opamp's inputs as "positive" and "negative", because there's room for confusion between those inputs and its supply terminals. The proper terms are "non-inverting" (for the "+" terminal) and "inverting". In my diagram I deliberately chose the node names "P" and "Q" to avoid such ambiguity, and because repeatedly saying "the voltage at the non-inverting input" quickly becomes tedious. Saying "\$V_P\$" is so much easier.

Starting as you did, by finding the state of the system for \$t < 0\$, after having been that way for a long time, since the switch in its open position, node P is connected to ground, and so:

You correctly described the opamp's behaviour. That is, being ideal, and having negative feedback, it will adjust its output \$V_E\$ in such a way as to maintain the condition \$V_Q = V_P\$. You can probably intuitively see that for \$V_Q\$ to be the same as \$V_P = 0V\$, the only way that can be true is if \$V_E = 0V\$ also. However, following your lead, I'll formally derive \$V_E\$:

The opamp reacts to changes in its output in the following way: If something happens to lower \$V_E\$, such as some load connected to its output, that causes a corresponding drop in \$V_Q\$. The opamp now has a non-zero difference between \$V_Q\$ at its inverting input, and \$V_P\$ at its non-inverting input.

Qualitatively, now \$V_P - V_Q > 0\$, and as you know, the opamp tries to amplifiy this difference (remember \$V_E = A(V_P-V_Q)\$, where A is the opamp's open loop gain.) This causes \$V_E\$ to rise, in opposition to the very perturbation that caused it to drop in the first place. It will continue to pull it's output higher in potential, harder and harder, until it restores equality between \$V_P\$ and \$V_Q\$. The same behaviour also prevents \$V_E\$ from rising.

And here's the thing you missed: because of this, the opamp output may be treated as an ideal voltage source, of value \$V_E\$, dependent only upon \$V_P\$. As \$V_P\$ changes, \$V_E\$ changes accordingly (as defined by feedback), but nothing else, absolutely nothing can change \$V_E\$.

In this circuit R3 and C1 do not have any influence over \$V_E\$, and \$V_E\$ may be treated as a stubborn, ideal voltage source. It may as well be a battery, as far as R3 and C2 are concerned, they have no way of knowing the difference.

When the switch is closed at tiem \$t=0\$, node P is connected to the voltage source V1:

The same rules and equations apply for this new condition, when finding \$V_E\$:

As a side note, I am sure you are familiar with this circuit:

Its the ubiquitous non-inverting amplifier, where:

Can you see this "module" is exactly what you have inside your own circuit? Also please be sure to understand the significance of the fact that this formula is completely independent of anything connected at the output. It's true regardless of the load, because of the reasons I outlined above, namely that the opamp has negative feedback, which will cause it to adjust its output in any way necessary to keep its inverting and non-inverting inputs at the same potential, making it able to overcome the influence of any load.

As you can see, both conditions agree with our more rigourous analysis above. I suppose the moral is that you should look for "building blocks" like this in all circuits you intend to analyse, so that you can apply the already-derived, tried-and-true formulae, instead of working it all out from first principles every time.

The last thing to do is "picture" your circuit in the light of the fact that we have two conditions, in both of which the opamp has become a simple voltage source, of 0V (before the switch was closed) and 12V (after):

Yes, everything is at zero volts up until t=0. What happens after that?

Somehow, you've managed to get the sign wrong for the final output voltage.

Remember that the output of an ideal opamp is a voltage source. What does this mean in terms of the resistance "seen" by the capacitor?

Not the answer you're looking for? Browse other questions tagged capacitor circuit-analysis circuit-design physics or ask your own question.

3
Find current in linear network
1
Source voltage in discharging capacitor equation
0
Confused how to derive output voltage from Op Amp and RC circuit
1
Applying KVL on RC circuit to get the natural reponse v_c(t>0)
1
How to Find DC Step Response of Semi-Parallel RLC Circuit
0
What are the initial conditions used to find the coefficients in the current equations?
0
What is the voltage across the capacitor 3ms after the switch is closed
3
RC Circuit Analysis Direction Changes Formula
2
confusion in RC circuit regarding initial conditions and capacitor voltage