I'm attaching a schematic of an RF transmitter made by Synoxo. Chip is the SYN115. The schematic is found in the datasheet.

I do not understand why L3 which is the PCB antenna (pointed with the red arrow) is connected on both ends. As far as I know, antennas are connected on one end on a PCB and the other end is not connected anywhere. Also why there is no value to L3?

Also what is the black arrow (pointed with my blue line?) 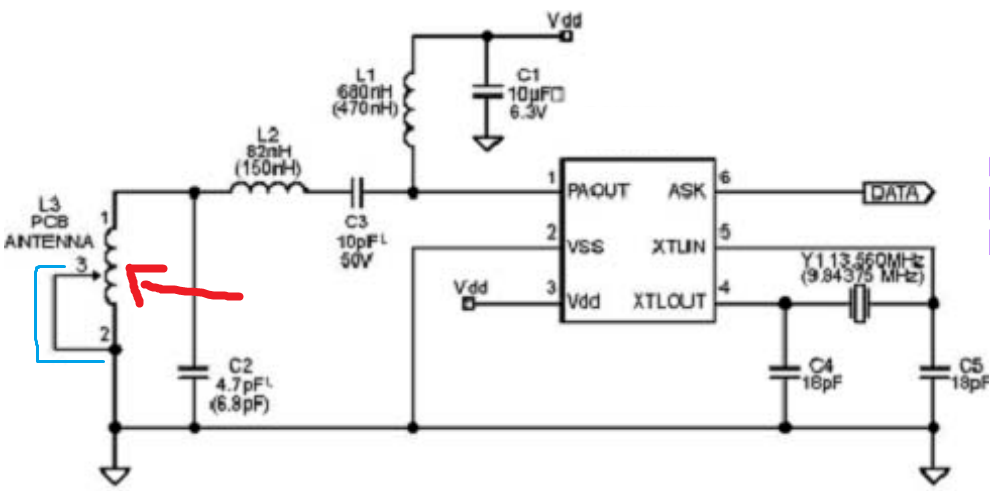 why there is no value to L3?

L3 (or at least the loop part) is printed on the PCB (as indicated on the schematic) hence isn't a lumped component you need to provide. The antenna is shown (somewhat vaguely) on the PCB diagram in section 15 of the datasheet you took the schematic from.

It would have been helpful if you had provided a direct link to the datasheet you are using with your original question rather than adding a bit more information for each comment/answer received.

The black arrow just means that the antenna/coil has an adjustable tap, that allows it's performance to be adjusted. It shorts out part of the antenna, thus changing it's electrical length.

From IEEE Std 315, here's the symbol for an adjustable inductor:

You don't choose a value for L3. It is a specifically shaped trace on your PCB.

The circuit you gave is a "typical application," but isn't a full design.

Later in the datasheet, the manufacturer shows the circuit and layout for a demo board they produce using the SYN115. 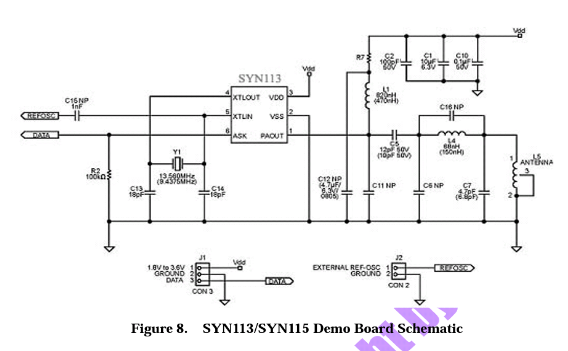 L5 is the antenna in the schematic, and L5 is that thick trace along top half of the layout on the right (the top layer.)

The parts list also says that L5 is the antenna and that is part of the PCB:

There are no details given for the dimensions of L5.

You have a few options:

If you work for a company that will be making a whole bunch of these things, then you should go with option 1. Options 2 and 3 are really only "usable" if you are doing a one off for a hobby project.

Another option would be to study antenna design, and design your own loop antenna and matching network.

If you'd like to install a jack and connect a regular antenna to the chip, then have a look at Figure 2 from the datasheet. That's a test circuit followed by a PCB layout. It includes a circuit for connecting a 50 ohm antenna jack. 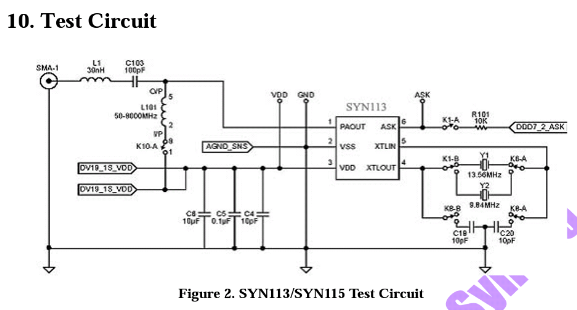 As a final option, you can just ignore matching and antenna design and just do what all the manufacturers do that make and sell the cheap SYN115 modules on AliExpress: Include an eyelet where the antenna should be (the antenna jack in Figure 2) and just hang a random piece of wire on it as an antenna.

Most of the projects you'll find on the internet that use these modules don't even bother putting an antenna wire on the module. They just assume (as you seem to) that the modules have an antenna on board.

Not the answer you're looking for? Browse other questions tagged rf pcb-design circuit-design transmitter pcb-antenna or ask your own question.

14
Need help with selecting an antenna for PCB
4
Chip antenna PCB layouts and feedline
4
What is the nature of the near field at a receiving antenna (excited by a far-away transmitter)?
4
Does RF chip antennas require top/bottom ground plane to operate?
2
How can I share a 900 MHz antenna between two radios?
9
PCB Antenna design for nRF2401
0
Need help understanding simple FM transmitter
4
Strange shapes on the Wi-Fi module PCB
7
How do I calculate a PCB antenna trace width?