What does this NPN BJT circuit represent, is it a switch or just a PN diode, and what should this plot look like when we sweep the value of Vbe, and why?

If you have difficulty carrying out the experiment, then you should explain the problem you are having and ask what is going wrong.

Once you carry out the experiment, you could post your completed setup and the results and ask if you have done it correctly and if the results are reasonable.

Since there seems to be some dispute about what \$V_{bias}\$ plotted against \$I_B\$ would look like, I whipped up a DC sweep generator and generated the plot.

I used an Arduino Nano I had laying around handy to make the \$V_{bias}\$ generator. The Nano puts out a 10kHz PWM signal that is filtered down to DC. By varying the duty cycle of the PWM signal, I can change the output voltage. The PWM generator has 1023 steps.

The red circled area generates the \$V_{bias}\$ from the PWM signal.

R2 takes the place of \$R_b\$ in the drawing in the question. I used a 2N3904 transistor because I had one close to hand.

I wrote a simple Python program to drive the Nano, collect the data, and crunch the numbers. It dumps the finished numbers into CSV file, and I used LibreOffice to make the plot itself. 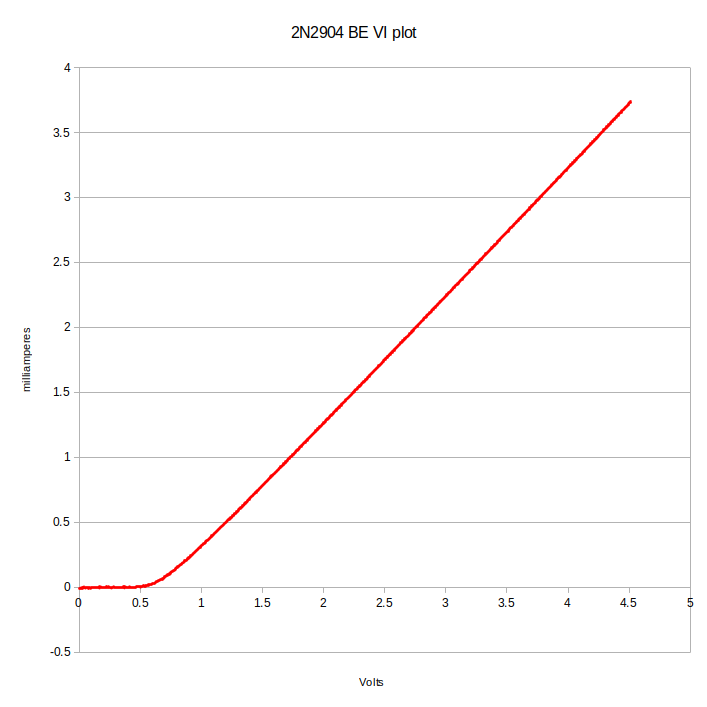 The plot of \$I_B\$ against \$V_{bias}\$ clearly shows the typical response of a diode junction. 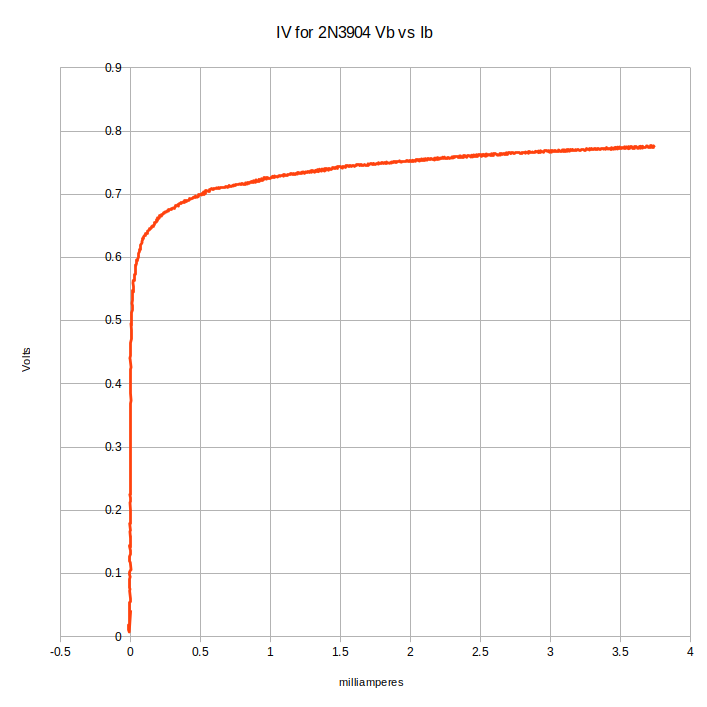 That shows the diode response of the junction as well.

I think the real purpose of this setup is to measure and draw the input IV curve of the transistor - the function Vbe = f(Ib), which is actually the IV curve of a diode (p-n junction, as you noted).

"Ib vs Vbias" does not make much sense because practically, it is the IV curve of the resistor Rb.

"Sweep the value of Vbe" is not so correct since, in this arrangement, we sweep the base current Ib = Vbias/Rb as an input quantity and should measure Vbe as an output quantity.

As you probably understand, I have neglected Vbe. OK, here is my philosophy about the graphical representation of the transistor input circuit.

For the purposes of this technique (we can name it "superimposed IV curves"), we have to reduce the input circuit of three elements (Vbias, Rb and Vbe) to a network of only two elements connected to each other - a source and load. Each of them will have an IV curve and since the voltage across them and current through them are the same, we can impose their IV curves on the same coordinate system. The intersection (operating) point will represent the voltage and current at this moment.

Usually, we combine Vbias and Rb into the first element (a real voltage source); the base-emitter junction will serve as the second element (a non-linear load).

But to impose the IV curves, we must first obtain them. The most common idea for this is: we change (move, rotate) the one curve to obtain the other. We can name the variable curve "scanning" and the other - "scanned". To do that, we have to change something of the "scanning element".

In our case, to obtain the base-emitter IV curve, we can change either Vbias or Rb. As a result, the IV curve of the Vbias-Rb composed element will either translate horizontally or rotate around the coordinate origin… and the intersection point will picture the famous diode exponent.

If we want to obtain the Vbias-Rb IV curve (aka "load line" or, more correctly, "generator line"), we should change something of the base-emitter junction (e.g., its threshold voltage)... but here it is impossible since it is fixed. It is possible, for example, when investigating the transistor output curve.

If we want to obtain the Rb IV curve, we should group Vbias and Vbe as the first element and Rb as the second one. Then, we have to vary Vbias to scan the Rb IV curve (line).

Let's finally consider again the "Ib vs Vbias" IV curve. If Vbias is the voltage of the input voltage source and Ib is the current through it, it should be the IV curve of an ideal voltage source (without internal resistance)... but it is not interesting for us here.

Related link: How do we investigate semiconductor devices in the educational lab?

Not the answer you're looking for? Browse other questions tagged switches bjt npn base dc-sweep or ask your own question.