Can a triac work with MT1 and gate reversed?

I have an apparently bizarre situation with a production pcb out of a Sprada coffee machine I am repairing. A BT136-600E TO-220 triac (NXP brand) is mounted the wrong way around on the pcb - pin1 (MT1)is swapped with pin3 (gate) ie. the triac has been rotated thru 180 degrees. Pin2 (MT2) is obviously as it should be. I deduce this because the datasheet show the pins as above but pin3 is directly connected to mains neutral on the pcb and pin1 is connected to a processor pin via a 270 ohm resistor. Pin2 is connected to the load, the load's other side to mains live.

The bizarre part is that the pcb silkscreen shows that the triac should be mounted this way, and this board has been manufactured and presumably tested this way. A second board I looked at is exactly the same so pcbs of this version and revision were presumably manufactured in bulk. The machine model is circa 2015 so the pcbs are not new. There is no evidence that the soldering has been disturbed ie. the triac has not been removed since manufacture. Since the triac drives an AC water pump there is no way that this could have been missed if it didnt work from day one. The fault on this board is that the triac has shorted pin1 to pin3. The water pump motor is rated at about 60W @ 230Vac (261mA) and the BT136 is a sensitive gate device which triggers at approximately 5mA.

So my only conclusions are that

I have not found any NXP/Philips/WeEn datasheets that point to the second possibility, so at the risk of making a clot of myself (3rd point) and going with the first one, my question is whether this is possible. How can the gate be triggered to conduct to MT2, and if so how much load current can it handle.

For this issue, I have done a bunch of research on the operation of triacs without finding a possible clue how triacs could operate in this configuration - perhaps I dont fully grasp the implications of gate vs MT1/MT2 currents and on/off states in the various quadrants. I have also used triacs in projects myself, but in a "conventional" configuration using MOCxxxx drivers.

If anyone could shed light on what could be happening I would be very grateful.

Edit: here are some pics 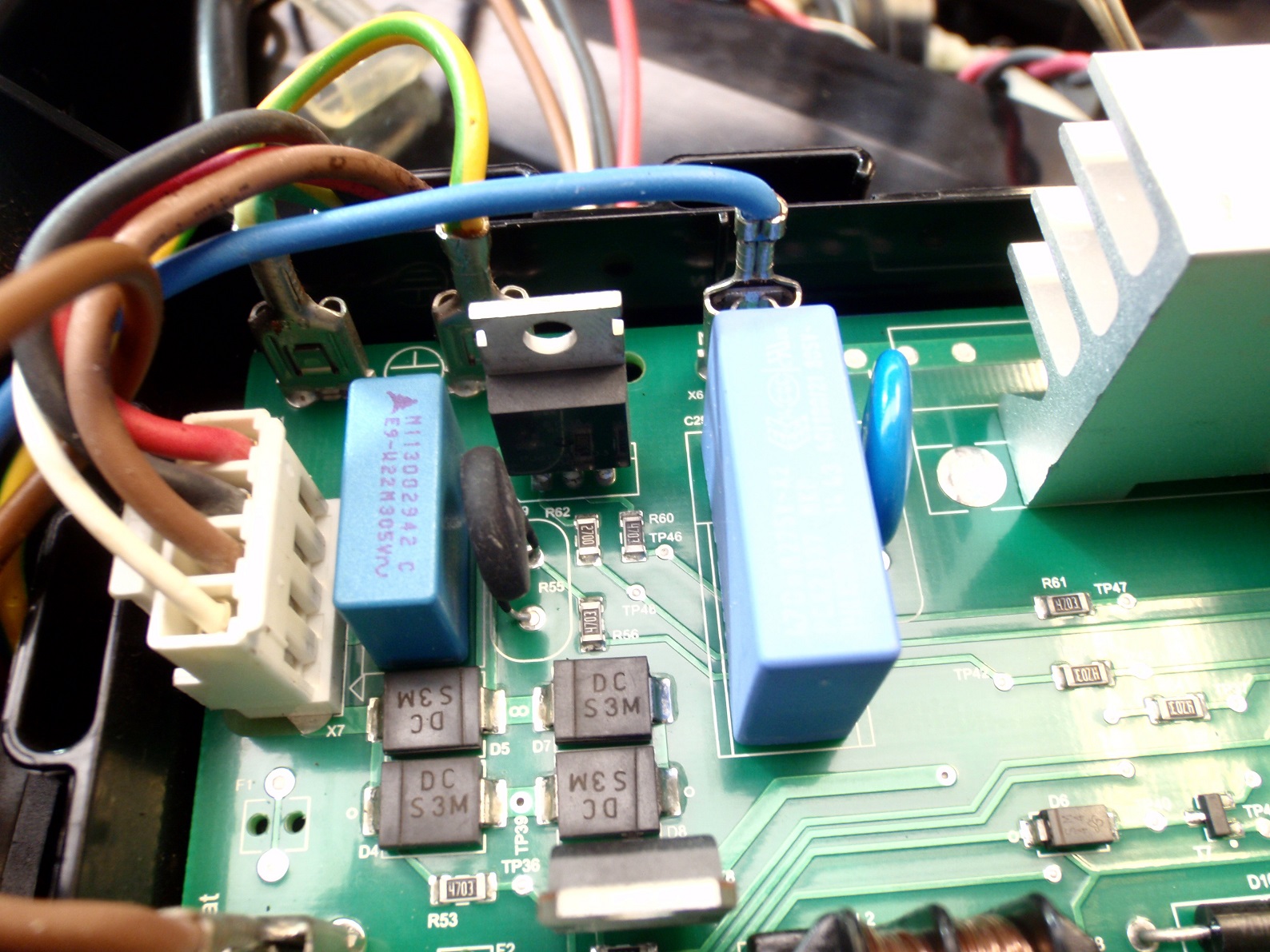 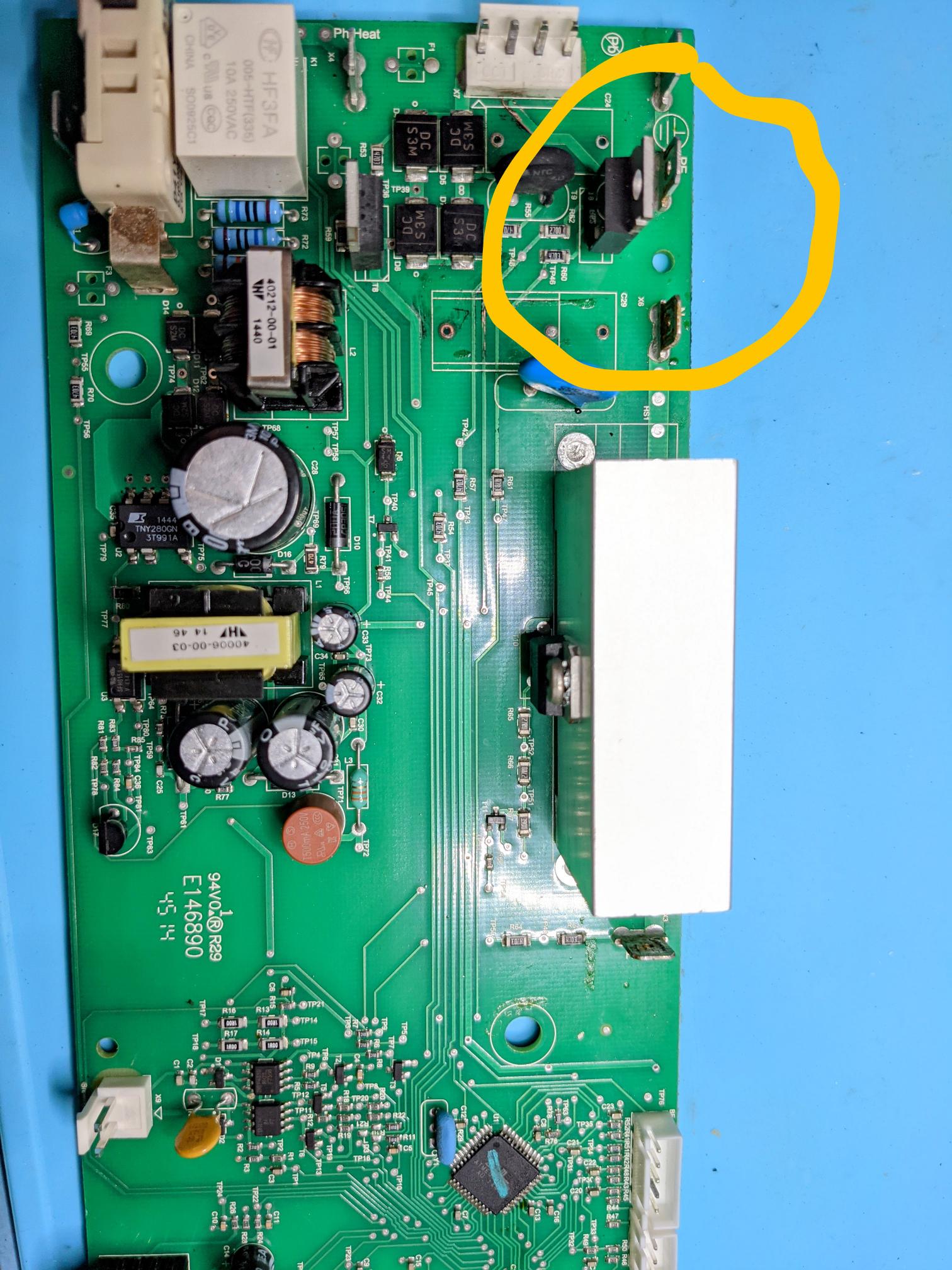 I think it's possible the triac would work, sort of, with MT1 and gate swapped.

All the load current would go through the gate, which would be hard on the triac, but if the load current is relatively small (like a couple hundred mA) it could work, and thanks to the series gate resistor the driving MCU could survive.

A short from gate to MT1 is what one might expect from gate abuse.. so..

Not the answer you're looking for? Browse other questions tagged ac triac or ask your own question.

10
Are TRIACs symmetrical?
2
Better triac gate configuration
2
Digital replacement for Rotary Capasitor based fan speed controller
2
Triac gate current understanding
0
Can i get away with a pcb heatsink for a triac?
2
Problem with TRIAC simulation
1
Triac gate biasing in crowbar circuit
0
TRIAC BT136 as DIAC BD3 conversion both have MT1 and MT2