There are some vias in my layout which I can't move after having selected them and holding left click. It displays a white cross after selection.

I have checked that those vias are not locked and they are not.

Any idea what I can do ? 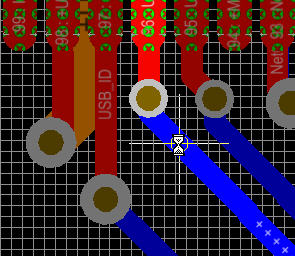 Generally when you are unable to drag components (and they're not locked) it's because clearance rules are holding them where they are. You can change the preferences in the DXP menu for moving components, but a less-permanent solution would be to press the "R" key while trying to drag the via. The "R" key switches the component placement mode between "Ignore Obstacles", "Push Obstacles", and "Avoid Obstacles". This should allow you to move the via regardless of the clearance rules provided you have the placement mode set to "Ignore Obstacles".

In Altium, you cannot move multiple vias by just selecting them. To move them, use menu Edit->Move->Move Selection.

In the situations, such as shown in your screenshot, I typically select all the vias and their tracks and use Edit->Move->Move Selection By X, Y... command and then resize the tracks to the correct length.

in Design->Rules->Clearance-> set your clearance and set option with "Different Net" (altium 20.x)