Why am I Seeing A Weird “Notch” on the Data Line For Some Logical 1s?

I'm attempting to build a Z80 homebrew computer for some retrocomputing fun and to teach myself the basis of electronic design. For proof-of-concept, I've already assembled a basic system on breadboards successfully in the previous weeks.

The current prototype is extremely simple. I used a 4 MHz crystal driven by a 74HCT04 Pierce oscillator as the system clock, two 74HCT573 latches in transparent mode (LE high) as a buffer for the 16-bit address bus, another two 74HCT573 in opposite directions controlled by RD and NOT RD as a bidirectional data bus buffer. I attached an 100 ns AT28C256 EEPROM (only 16-KiB is decoded) and two 150 ns 8-KiB SRAM chips to the system bus. I used a 74HCT42 to generate the CS signal and hardwired the OE of the EEPROM to low, WE to high, leaving only one CS signal to control the EEPROM.

Everything on the breadboards is noisy, but the system appeared to be fully operational after I completed every stages. Now It can fetch instructions from the EEPROM, read and write data from/to the SRAM, and it has a serial port made from another latch 74HCT573, D0 is connected to D0, LE is (NOT (IOREQ NAND WR)), output comes out from Q1, in other words, only one output port without adrress decoding logic. I've written a CPU/RAM-intensive benchmark program and my computer can output the expected result. Memdumps also showed that the Z80 can read all the bytes from the EEPROM correctly, so everything is working.

But when I tried to probe D0 pin of the data bus, I was seeing some strange "notches" for some apparent logical 1 outputs. 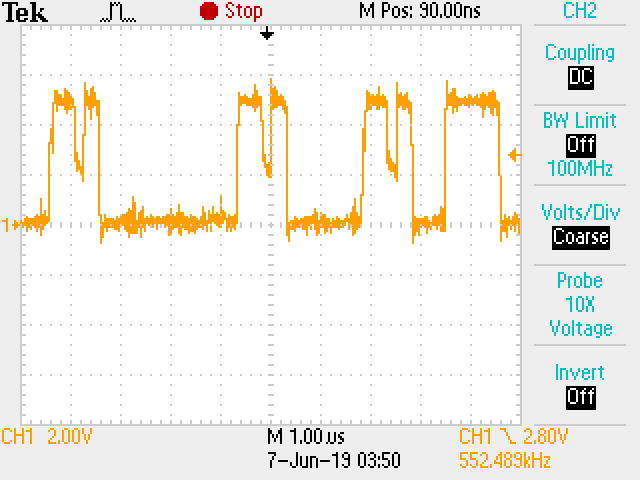 and they seems to always appears for some logical 1s shortly after the CS signal of the EEPROM goes active, for example, here's a capture of the weird notch superimposed on the blue EEPROM CS signal. 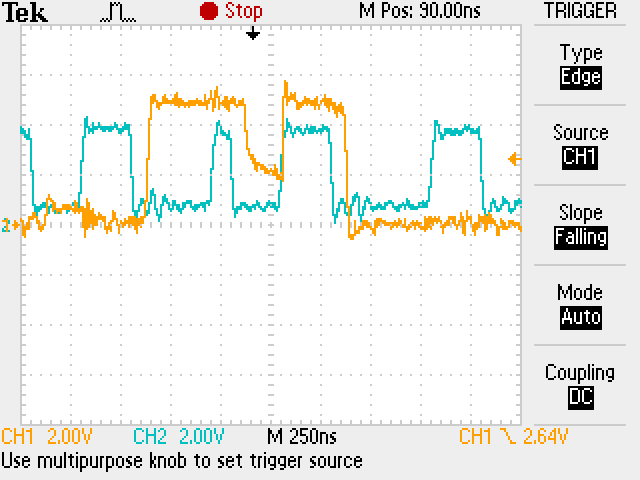 I tried to isolate the problem, so I hardwired all CS pins of the SRAM to HIGH, effectively removing them from the system, and I've written a simple test program that has no memory access.

But the problem is unchanged, weird "notches" still always appear for some logical 1s, just after MEMRQ and/or (since it's essentially one-chip now) CS (blue) goes low.

All CS pins of the SRAM are HIGH, so the system is pretty much only has a AT28C256 EEPROM chip as memory, and a latch as an output port. The system also has a in-system programmer made from an Atmega328p to reprogram the EEPROM on-the-fly during a DMA request, but I don't think it's the culprit since I tristated all the data and address output of the programmer, and I've seen notches even before I added the programmer. 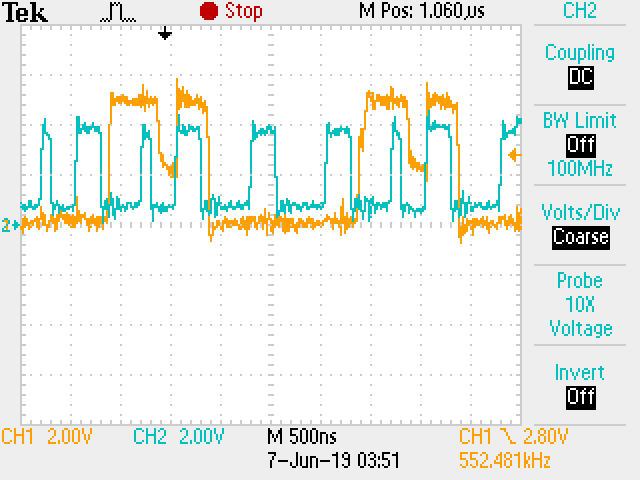 So the "notches" must be created during an opcode fetch cycle. What are they?

I have a few hypothesizes:

I'm not sure if it's adequate though, especially considering the difficulty of placing 104 capacitors near the chips on a breadboard. Perhaps adding more can fix it?

What I'm interested in is the root-cause of the problem, if it can be confirmed to simply be the inherent problems of inadequate decoupling or poor signal integrity on breadboard, I can stop attempting wasting time to troubleshoot or worrying about it since the final design would be a PCB. But I'm not sure.

Update2: In my mind, I believe Bruce Abbott's comment has given the correct answer and the problem is solved! Although I cannot test it until tomorrow. The culprit is Z80's DRAM refresh, see my own answer for details. Currently, no new answer is needed, and I'll accept my own answer when I confirmed the solution. If it's doesn't work, I'll update the question. Thanks for everyone's help.

Thanks for everyone's help. I believe Bruce Abbott has given the correct answer. The analysis below is confirmed, when he mentioned the word "refresh", I think the problem is already solved. I knew how Z80 refreshes the memory, but completely forgot about it in the previous days.

...another two 74HCT573 in opposite directions controlled by RD and NOT RD as a bidirectional data bus buffer." - maybe this? Please supply a circuit diagram showing the control signals.

I suspect it is caused by the refresh at the end of each M1 (opcode fetch) cycle. Need to see exactly how you are generating CS and data bus buffer enables. 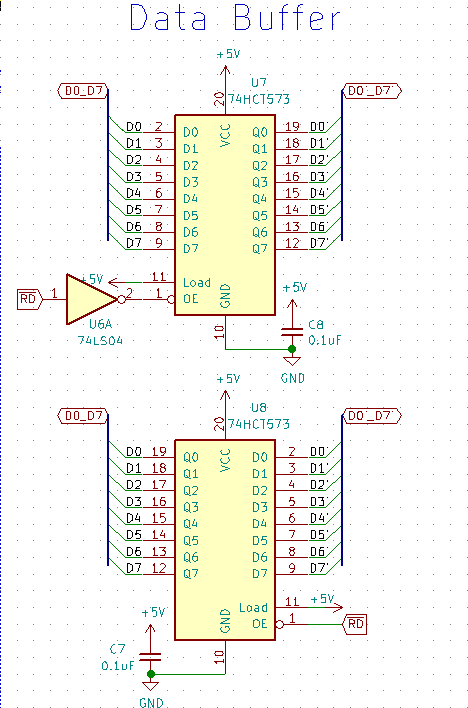 Nevertheless, the Z80 performs a memory reading for DRAM refresh immediately after the opcode fetch. This time, RD is HIGH despite it's a read operation, causing the buffer to flip its direction and drive the bus, the result is a bus contention. So weird "notches" would always appear during the DRAM refresh cycle, but not ordinary memory reads/writes or I/O. This explains why the "notch" would always appear, but only for some, and not all logical 1s. 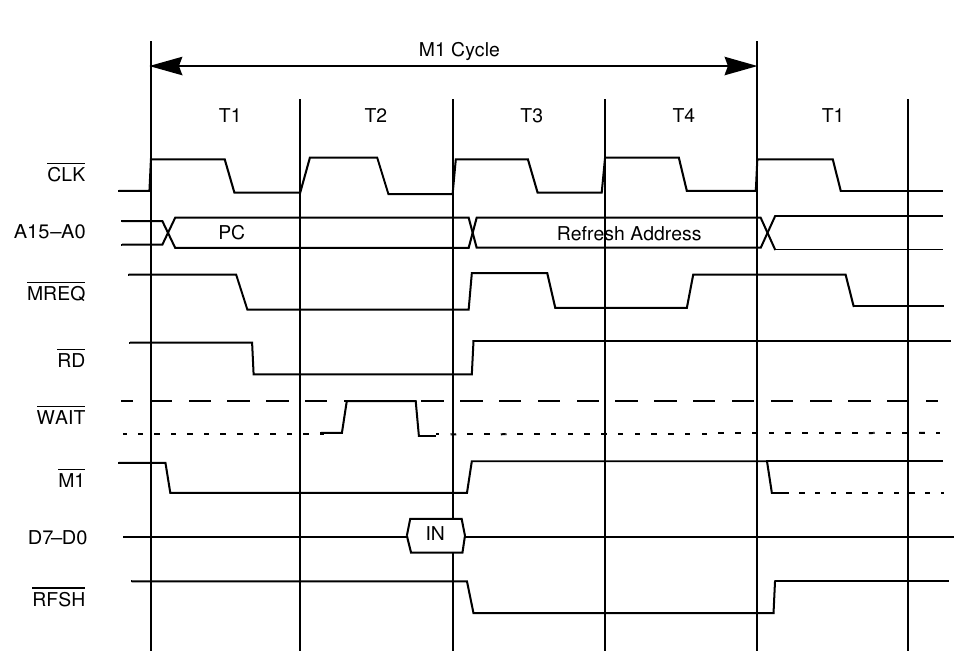 Furthermore, SRAM doesn't need to be refreshed so the DRAM refresh is completely useless in my system, and this bus contention would not corrupt any instructions or data, making the system appears to be fully functional.

Solution: implement (RD AND REFRESH) and (NOT (RD AND REFRESH). In the next revision, I should also test BUSACK to make sure the data buffer is not driving the bus during a DMA operation as well.

Update: I can confirm the problem and the solution. (don't do this! This is wrong as well, see Update 2). 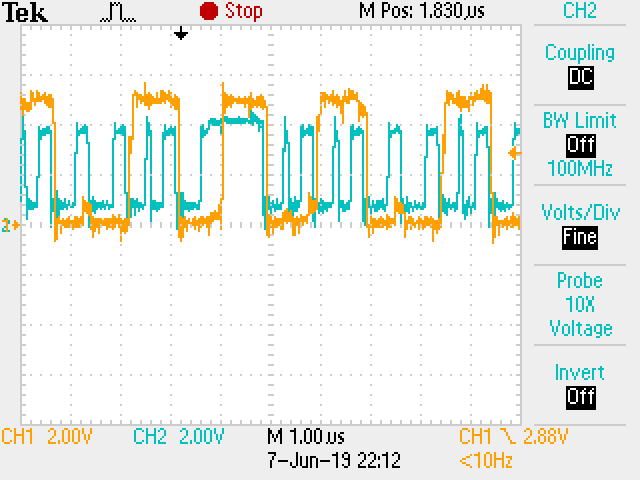 During a memory write cycle, the Z80 CPU would start driving the bus before WR goes active low, at this time, the data buffer was still driving the data towards the CPU, oops, creating a bus contention. 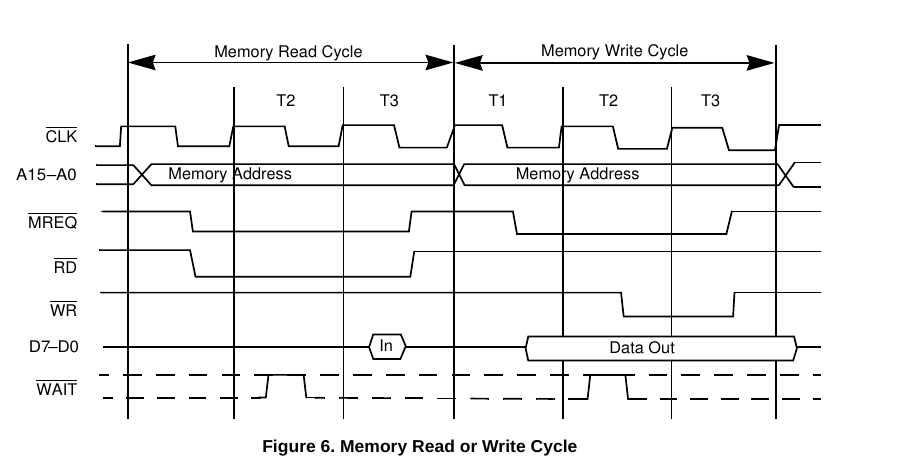 Bruce Abbott is correct: it's better to always use RD and WR signal independently to control each buffer, instead of inverting a single one. 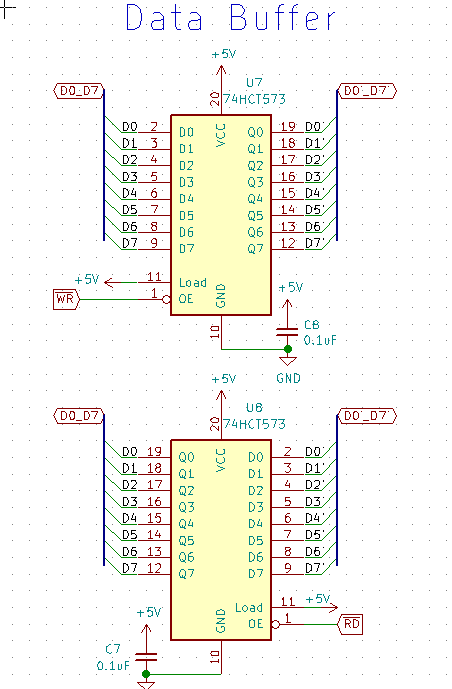 And finally, again, the above schematics is a simplification, one should also test BUSACK to make sure the data buffer is not driving the bus during a DMA operation as well.

Ensure that you have adequate decoupling capacitors on all your ICs. A 100nF ceramic from power to ground on each IC keeping its leads as short as possible and a low ESR electrolytic say 100uF on the breadboard across the power rails.

Whatever was driving D0 goes to tristate (high-impedance mode) and then a pull-down somewhere in the D0 net brings the voltage down slowly (time constant defined by the pull-down resistance and the parasitic capacitances of ICs and traces). The exponential nature of the waveform is a strong indication that the line is not being driven by something strong, but rather by a relatively weak pull-down.

Try adding another pull-down resistor to the line and check whether the exponential waveform goes to zero quicker.

Keep in mind this is not necessarily a problem and your bus may work perfectly fine with this.

Your hypothesis #4. It's also possible D0 is shorted to another logic line. I find this unlikely, since in this case you would not see an exponential waveform with relatively long time constant as you see now. You can probe other nets in your circuit in search for another identical waveform, indicating you have a short.

PS - this is not a signal integrity problem, the pulse width is way too long for that

Not the answer you're looking for? Browse other questions tagged embedded logic-gates signal-integrity timing z80 or ask your own question.