I2C bus line over different layers in an arc

I have the following board design in mind: 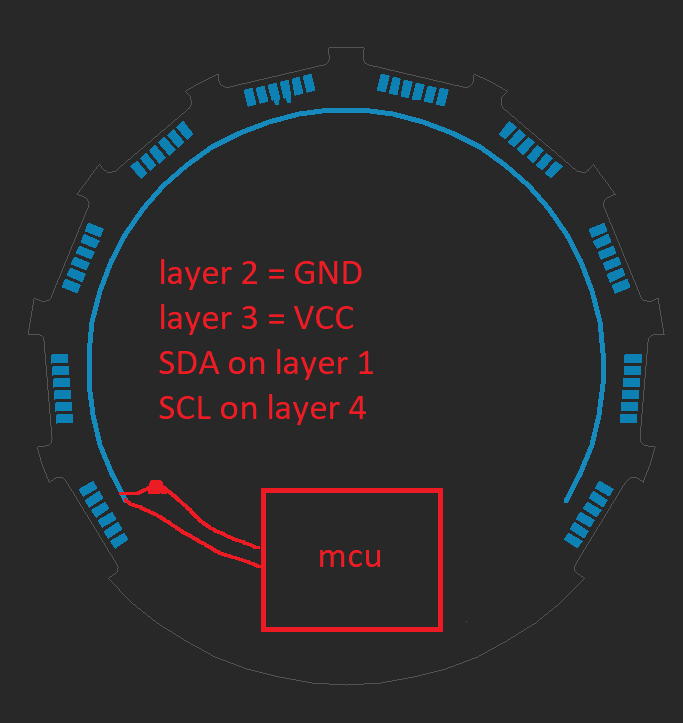 It's a 4 layer, ~5cm diameter board where 10 slave PCB's will be soldered to it that are connected over the I2C bus. The trace line you see is roughly 8 cm in length. This bus has the clock going over the top layer and the data bus over the bottom layer, but I could always change that.

I could also route the traces over 1 layer but use via's to cross each other at the end points, if that makes sense.

As far as I can tell I'm not doing something that is against any I2C "rules" bus I'm also not that familiar with this sort of setup.

The end-point devices will add roughly 150-200 pF total load capacitance to the bus, excluding trace, solder joint and via capacitance. Which as far as I could tell is not a problem since it's far lower than 400 pF already. The bus will be running on 400 kHz.

What method of routing would be recommended here? Am I accidentally designing a radio receiver or worse, a transmitter?

edit: I forgot a case where both are routed on the top layer; Should I match the amount of vias used on both lines even if those vias aren't strictly needed?

Looks fine to me. You could split it in two at the middle and go both ways (don't join them at the far end) but I don't think it's very important for only 80mm total length.

Make sure you have pullup resistors commensurate with your capacitive loading and drive capability of the weakest chip.

Not the answer you're looking for? Browse other questions tagged pcb-design i2c emc signal-integrity or ask your own question.

2
Reasons why an I2C bus requires a minimum value of capacitance on the clock to function?
3
How many pull up resistors per I2C bus
4
Dealing with splits in my ground plane
19
How to fix a PCB design mistake after manufacturing?
7
I2C Issues with First PCB
9
How do PCB vias affect signal quality?
1
Is it better to route Ethernet on the top layer, or to use vias?
3
I2C bus fails after a few sensor reads
0
Placement of components on PCB