I am studying Digital Logic Circuit right now and I have question to ask. I have searched lot of places in order to find this answer, however due to my lack of searching ability I was not able to find any. So, I came here to ask this question here.

However, I cannot find information about SR Flip-flop with the same question. Both NOR and NAND implementations are noted same in circuit diagrams. (Searched Different implementations of JK flip flop here, but the answer made me quite confusing. Since the answer says that the circuit truth table is wrong.).

Since my major is CSE rather than electronics engineering, I do not know how to treat recursive circuits in Flip-flops and Latches. Meaning that I am unable to draw truth table and characteristic table myself.

Since I am new here, if there are any wrong expressions please let me know. I will edit them as soon as possible.

NOR and NAND SR Latches

The NAND-based flop will set and reset based on the falling edge of an input. The inputs are considered active-low.

The NOR-based flop will set and reset on the rising edge of the input. The inputs are considered active-high.

Try them here: NAND, NOR SR latch sim in Falstad 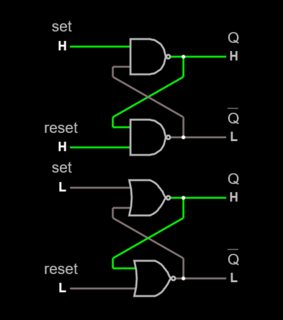 As you saw, there are a number of ways to make a JK latch. However, every single one of them has a hazard: oscillation when both inputs are active. All the diagrams that show some kind of pulse detector? Forget them, they're useless except as object lessons in how not to make a latch. More about that here: JK latch, possible Ben Eater error?

Here's a sim of a correct JK flop using a master-slave pair: 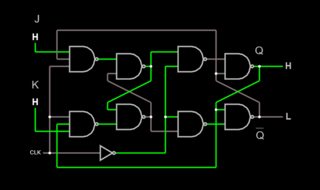 Not the answer you're looking for? Browse other questions tagged digital-logic logic-gates flipflop boolean-algebra latch or ask your own question.

53
Difference between latch and flip-flop?
1
How does this SR latch work?
1
How did they get to the SR-latch with 2 NOR gates?
3
S-R latch / flip- flop question
10
SR Flip-Flop: NOR or NAND?
25
What is a flip flop?
0
SR latch and SR flip flop difference
0
Different implementations of JK flip flop