From my understanding my PCB designer is simply using the correct impedance, routing the signal on the top layer and using the ground plane below as a return path.

From his experience it would be advisable to simply use a right angle connector outside of the PCB, and doing another 90° curve inside the PCB is a bad idea (we already have one, but at -10 dBm).

I would like to understand what kind of problems another 90° in-pcb signal path curve would bring (only signal attenuation? Or distortion as well?) and if that depends on the power of the signal doing the curve (eg. would a -10 dBm signal be less affected than a 20 dBm one?).

This is probably not too much of a problem at 900MHz - at 10GHz it would certainly need consideration. The fields on a transmission line like to remain uniform - any discontinuity in the line causes a disturbance of the field pattern which leads to a reactive effect - generally for bends there is a degree of associated 'fringing capacitance'. A rule of thumb is that the minimum bend radius should be not less than 3*line width. A corner can also be compensated by use of a chamfer.

Transmission lines are passive and linear, so the loss would not change with power.

I would refer you to Waddell https://books.google.co.uk/books/about/Transmission_Line_Design_Handbook.html?id=MyxTAAAAMAAJ which contains models for microstrip bends

Alternatively Gupta,Garg and Bahl might help - https://books.google.co.uk/books/about/Microstrip_Lines_and_Slotlines_Third_Edi.html?id=1PQfAgAAQBAJ&redir_esc=y - see excerpt below. However, note the frequencies here and how the match improves dramatically at lower frequencies.

The 1.8W compensated corner is the best, but I have tended to use curves as they are more easily available in PCB tools. Note that the curve given below is a not the 3*W radius I suggested earlier, but the tight curve shown in (a) - a gentle 3*W bend will perform much better. 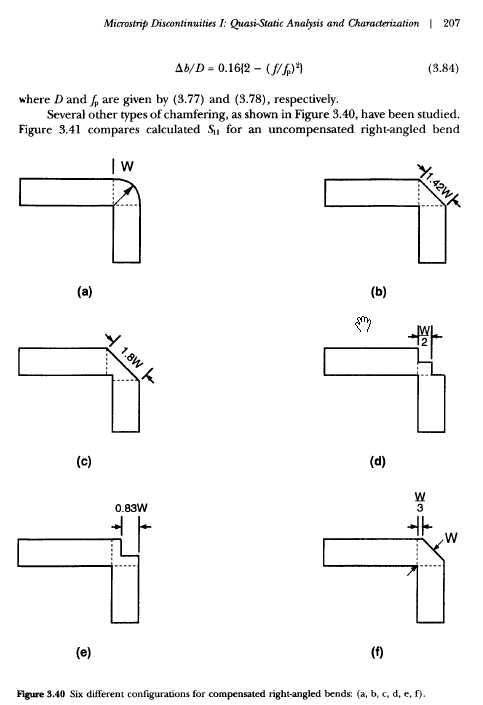 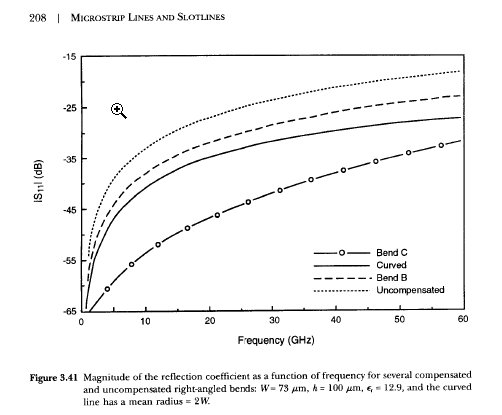 Not the answer you're looking for? Browse other questions tagged pcb rf or ask your own question.

74
Why is there such a strong preference for 45 degree angles in PCB routing?
18
Should you place traces at right angles through a via?

19
PCB routing: EMI and signal integrity, return current questions
8
50MHz SPI PCB routing, use vias or resistors?
10
Return path on a PCB
5
PCB Stackup - Current return path
2
Do I need split the power plane?
5
PCB Layout - Ground Plane Return Path
9
Optimize signal return path with decoupling capacitors in a two layer board
1
What is the current return path in this condition
2
4 layer PCB- fill free space on Top and Bottom
2
How to reduce EM radiated emissions in a 2 layer board with 2 components?